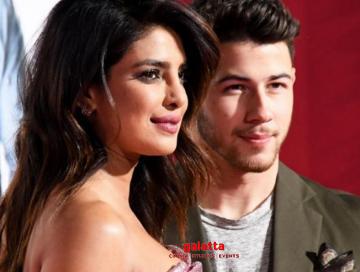 One of the most popular star couples in the world, Bollywood actress Priyanka Chopra had married American singer Nick Jonas last year. They had wed in a traditional Hindu ceremony at the Umaid Bhawan Palace in Jodhpur, Rajasthan followed by a wedding under the Christian formalities. Since then, they have been giving major couple goals to many in love and relationship with Priyanka and Nick expressing their love for each other on several occasions on their social networking pages. Now, Priyanka Chopra Jonas has posted on Twitter page a video while conveying her wishes to Nick Jonas on the occasion of their first wedding anniversary. Check out her statement on Twitter along with a video and the pictures she has shared:

And Thank you to everyone for the love and good wishes. We feel blessed. pic.twitter.com/UZgnYQZlVx

Prior to their first wedding anniversary yesterday (December 1), Priyanka Chopra had surprised Nick Jonas last week by gifting him a puppy dog named Gino. A video taken by the Bollywood superstar actress was later shared by Nick Jonas on his Twitter page. Check out the video below:

Pri came home with the absolute best surprise this morning. Please meet our new pup Gino. I haven’t stopped smiling since I woke up this morning and finally realized what was going on. Thank you @priyankachopra ❤️ 🐕 pic.twitter.com/98ejOCdWcS

As for her upcoming projects, Priyanka Chopra, who had made her transition to Hollywood with the American action drama thriller TV show, Quantico, went on to become a huge name in the US. Since then, she has gone on to star in three English films while making an appearance in a documentary and also produce several notable regional films under her Purple Pebble Pictures banner. She will also star in two upcoming Netflix films - an adaptation of acclaimed writer Aravind Adiga's best-selling novel, The White Tiger, and Alita: Battle Angel director Robert Rodriguez's superhero film, We Can Be Heroes. She is also set to star alongside Mindy Kaling in a comedy about an Indian-American wedding, and will be portraying the lawyer Vanita Gupta in the courtroom drama Tulia, which is an adaptation of the 2005 non-fiction book, Tulia: Race, Cocaine, and Corruption and will chronicle the events of the 1999 racial injustice case that took place in the Texas city of the same name.