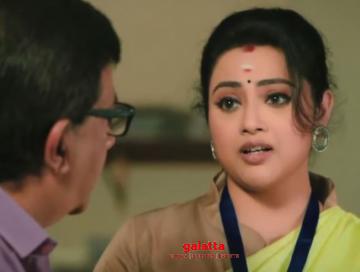 Actress Meena continues to be one of the most revered stars among audiences across South India having been part of cinema for well over three decades. Having started out as a child artiste in legendary actor Sivaji Ganesan’s Nenjangal in 1982 and in several films before charming her way into the hearts of fans across Tamil Nadu in ‘Superstar’ Rajinikanth’s 1984 smash hit, Anbulla Rajinikanth, Meena first debuted as a heroine in Telugu in 1990 in Navayugam. Subsequently, she went on to land her first role in Tamil as the female lead in Rajkiran’s En Rasavin Manasile in 1991 after which there was no looking back. Meena has since gone on to star opposite top stars among whom include Kamal Haasan, Sathyaraj, Vijayakanth, Ajith, Vijay, Arjun among others in Tamil cinema. It came as a big delight when the actress was earlier this year announced to be part of the upcoming action comedy web series, Karoline Kamakshi, which had a teaser released last month with ZEE5 now unveiling an action-packed trailer.

Premiering on December 5 on ZEE5, Karoline Kamakshi has Meena starring alongside Giorgia Andriani and Y. Gee. Mahendran with the story revolving around Karoline, a French detective, and Kamakshi, a traditional Tamil brahmin girl. In the Karoline Kamakshi trailer, we see the two teaming up to catch the infamous drug lord, Furkin. There are quite a lot of expectations surrounding this latest effort from Meena considering it’s her first major role in Tamil since 2011 when she was seen in Thambikottai opposite Narain. She is also at present appearing as a judge on the talent show, Lollupa, airing on Sun TV and will be seen in Mammootty’s upcoming action film, Shylock. Directed by Vivek Kumar Kannan and Yuvaraj D serving as the second unit director, Karoline Kamakshi has cinematography by Balaji, editing by Madan, music composed by Side by Side with Naveen on board as the Executive Producer and Hari as the Line Producer.

Watch Meena in action in the Karoline Kamakshi trailer below: