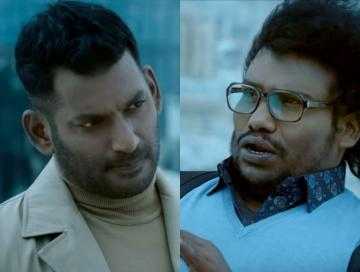 Actor Vishal’s much-awaited film, Action, an action thriller has hit screens worldwide starting today (November 15) and is his reunion with director Sundar. C after Aambala and the unreleased, Madha Gaja Raja. Vishal has been in peak form with his last few releases having chosen scripts that cater to the demand for content among which were Thupparivaalan, Irumbu Thirai and Ayogya. Action produced under R. Raveendran’s Trident Arts has Vishal paired opposite Tamannaah and popular Malayalam actress Aishwarya Lekshmi making her Tamil acting debut while comedian Yogi Babu is appearing as the comedy relief. With the film out in theatres now, a sneak peek video from the film has now been released and shows Yogi Babu explaining how he managed to gather information regarding Vishal.

Action has music composed by Hiphop Tamizha followed by cinematography by Dudlee and fights by the stunt choreographer duo Anbariv. The teaser and the trailer showed Vishal and Tamannaah engaging in high octane action-packed stunts with Vedalam fame Kabir Singh Duhan appearing as the antagonist.

Check out the Action movie sneak peek video below: