Vishal's next movie title and first look released! Check it out...

Vishal is one busy man and he has already had a release this year, in Ayogya, which fared well at the Box Office. Today, his second release of the year - Action, has hit the screens. This movie, bankrolled by R Ravindran under his Trident Arts banner, is directed by Sundar C and stars Tamannaah as the female lead! The reviews on Action are awaited with the first shows for this movie currently happening at the theatres! It is already known that Vishal has been working on a movie with debutante director MS Anandan for his own Vishal Film Factory banner. Today, the title and first look of this movie have been revealed!

Vishal's new project with MS Anandan had earlier been touted to be a sequel to his 2018 blockbuster hit Irumbu Thirai, which was directed by PS Mithran. Now, this movie has been titled Chakra and the first look shows Vishal in an intense and angry look, in the middle of a fight sequence. If this were any indication, Chakra might turn out to be an intense action entertainer, a genre which seems to be working well for Vishal. Yuvan Shankar Raja is scoring the music for this movie, which will also star Manobala and Robo Shankar in vital roles.

We hear that Chakra will see three beautiful lead ladies in Shraddha Srinath, Regina Cassandra and Srushti Dange. Balasubramaniem is handling the cinematography and reports suggest that Chakra might be hitting the screens for Pongal, 2020! Currently, Vishal is in the UK, shooting for his next movie - Thupparivalan 2, with director Mysskin. This movie also stars debutante Ashya, Prasanna, Gauthami and Rahman. Keep watching this space for more updates... 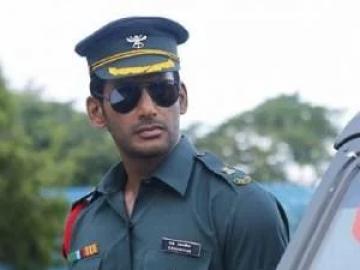