Popular Tamil actress Vijayalakshmi, known among fans for her performances in films like the Chennai 600028 franchise, Anjathe, Biriyani to name a few, will next be seen in Chimbu Devan's multi-starrer drama, Kasada Thapara. Vijayalakshmi, born to legendary Tamil filmmaker Agathiyan, married Pandigai movie director Feroz in 2015, with the happy couple being blessed with a boy, who they named Nilan. After gaining fame in films, she then made a transition to television by acting in a Sun TV serial titled Nayagi. Vijayalakshmi gained a bigger reach among fans after she participated as a wild card contestant in the smash hit reality show, Bigg Boss Tamil season 2, on Vijay TV, in which she went on to be declared as the second runner up.

Quite active on social media, Vijayalakshmi recently uploaded a dance video on her Instagram page, which received a huge response from fans, including many advising her on the attire she should and should not wear. Soon after the dance video became viral, Vijayalakshmi issued a response to her trolls who were advising her on her lifestyle choices, with her reply getting a big approval from many of her fans. Vijayalakshmi, who also has a YouTube channel, danced to the song "Vroom Vroom", and captioned it, "The confidence u get when u work out regularly #fitmomsrock #vroomvroom #whyshouldmom".

Vijayalakshmi, who has more than 4 lakh followers on Instagram, soon began receiving comments for wearing shorts, with one follower stating that he had lost all respect he had for her. Vijayalakshmi was quick to respond to her followers on her wardrobe choice for the dance video and thanked them for their advice. She responded saying, "In light of the welfare of everyone, I thank all those who gave me such abundant advice. But, I got my life sorted. Apart from that, here's a big hug to all the beautiful people." Below are some of the screenshots of the comments by the users, including Vijayalakshmi's replies: 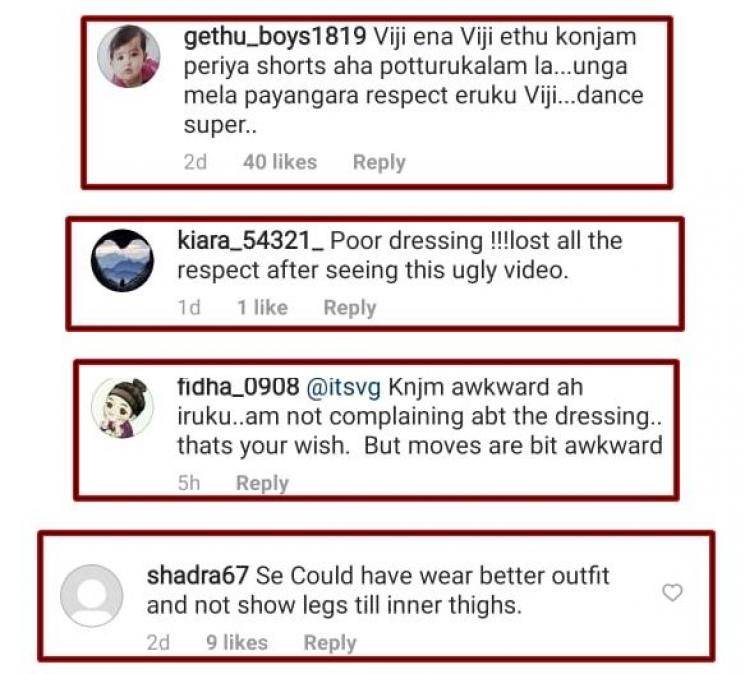 Sivaangi makes an important clarification - asks fans to REPORT THIS!