Dhanya Balakrishna is well-known actress who worked in all the 4 south Indian languages - Tamil, Kannada, Telugu and Malayalam films. After making her debut in AR Murugadoss's 7am Arivu (2011), she appeared in ventures including Gautham Menon's Neethaane En Ponvasantham (2012), Atlee's Raja Rani (2013) and Srikanth Addala's Seethamma Vaakitlo Sirimalle Chettu (2013). Dhanya made her debut as a female lead in Telugu with Chinni Chinni Aasa (2013). 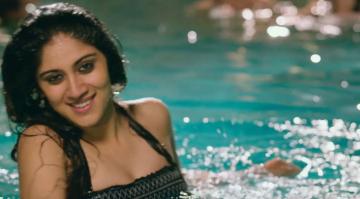 Dhanya Balakrishna began her acting career with performances in theatre, before being signed on to play a supporting role in AR Murugadoss's 7am Arivu (2011) alongside Suriya and Shruti Haasan. She portrayed a small role in Telugu film Seethamma Vakitlo Sirimalle Chettu as a girl who proposes Mahesh Babu. However, she got her first big break when she played the lead role in the Telugu film Chinni Chinni Aasa which got released in November 2013. She then played the lead role in Balaji Mohan’s web series As I'm Suffering From Kadhal which was released in both Tamil and Telugu.

Now Dhanya is acting in an adult-oriented crime thriller Anukunnadhi Okkati Aynadhi which is called Lollypops in Tamil. The film is planned to release in all the 4 south Indian languages. Apart from Dhanya, the film also features the likes of Komalee Prasad, Siddhi Idnani, Tridha Choudhury, Raghu Babu, Himaja, Raghu Karumanchi, Sameer and others. Now watch the super interesting trailer here: