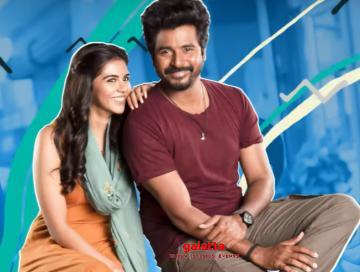 Sivakarthikeyan's Hero is gearing up to hit the screens on December 20 amidst good expectations from the fans. This will be the second directorial venture of Irumbu Thirai fame P.S.Mithran who showed immense promise in his debut. Talking about Hero, the first single and the teaser of the film have already been released and the latter got a very good reception from the fans. The teaser established the premise of the film and suggested that it could deal with the commercialization of education and the scam that revolves around it.

The makers have now released the third single from the film and this song is called 'Over'a Feel Pannuren'. This romantic track is composed and crooned by Yuvan Shankar Raja with lyrics penned by Pa Vijay. Mc Sanna has lent her voice for the additional vocals and has also written additional lyrics. Yuvan stands out with his breezy rendition and the fans will surely like it. The song has been officially released on the YouTube channel of Lahari Music who owns the film's audio rights.

The team had recently released an augmented reality game, as part of the film's promotions, and the game has caught the attention of the social media users. Featuring Kalyani Priyadarshan, Abhay Deol, Action King Arjun and Robo Shankar in the cast, Hero has cinematography by George C Williams and editing by Ruben. For now, check out the newly released romantic track, 'Overa Feel Pannuren' from Hero: