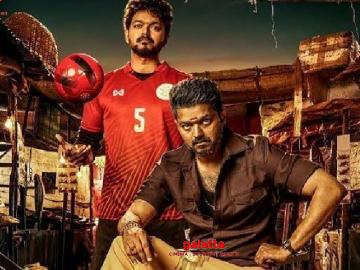 Thalapathy Vijay is a fan favourite of hundreds of thousands people and they just idolise him and celebrate every single thing he does. His latest release - the blockbuster Bigil, released on October 25th for the occasion of Deepavali. Even after three weeks from release, the movie is running to packed theatres all over the world and the collections are breaking record after record. The 'Verithanam' song from Bigil has been topping charts right from the time it was released and there have been many fans for this song. The latest to join this bandwagon is an American!

David Thompson, the Chief Marketing Officer of an Indian start-up company by the name of Freshworks, had earlier took the world by storm when a video of him dancing for the 'Verithanam' song went viral. Today, he has hit the headlines again by trying his hand at singing the 'Verithanam' song and the video has again gone viral. It has been reported that the CEO of Freshworks - Mr. Girish Mathrabootham, is also a huge fan of Thalapathy Vijay. These fans from various parts of the globe show Thalapathy Vijay's massive pull and the hold he has over his fans' hearts!

Bigil, directed by Atlee, has been bankrolled by AGS Entertainment and had music by AR Rahman. GK Vishnu has handled the camera for this movie, which has editing by Ruben. Following the release of Bigil, Thalapathy Vijay has already moved on and begun working on his next - Thalapathy 64, which is being directed by Lokesh Kangaraj and financed by Xavier Britto. The star cast of Thalapathy 64 is massive with Makkal Selvan Vijay Sethupathi, Anthony Varghese, Malavika Mohanan and Shanthnu Bhagyaraj, among others. Keep watching this space for more updates...

Check out the viral video here: