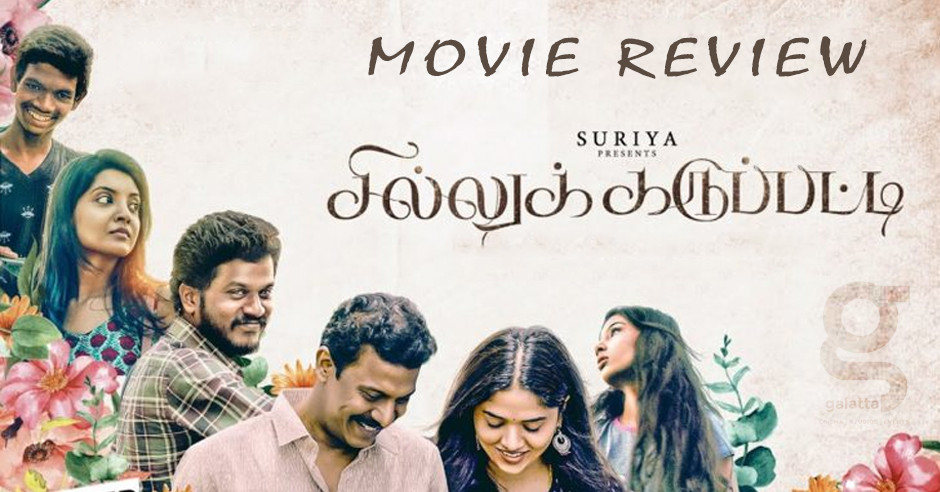 Sillu Karuppatti is an anthology with four different love stories of different ages, from 16 to 60.

The first one happens between a garbage collecting teenage kid and a girl (baby Sarah) from a rich family. The contrast between the two characters is the first good impression of the film. Also, they don’t really get to meet each other directly just before the end and this might not seem to be a pleasing factor. There is a little boy who acts as a crowd-puller in this story. Unlike other three stories, it is quite easy to guess the climax in this one and hence the curiosity element did not really meet up. The English speaking portions look force-fitted and it felt like the scenes were placed just to showcase stature variety.

The second story is between an IT employee who is also a YouTuber suffering from cancer and a costume designer, played by ‘Kaala’ Manikandan and Nivedhithaa Sathish respectively. Both the actors are terrific and their characters earn respect. The audience will get easily connected to Manikandan’s character and will empathise him for his unfortunate past. But there’s this sensible girl Nivedhithaa who enters his life and makes things beautiful. The duo’s conversations are lovely, mature and no-nonsense. The progression is poetic and it would make the audience wish the story never reaches its end. That’s how addictive this story is. Not to forget the well-written crow sequence that has an amusing ‘Kaakka’ dialogue.

The third story is the most cutest and the sweetest of all. It is a story between two old people (Leela Samson and Sree Ram) who are currently single. The initial park scene is wonderfully staged. The lengthy hospital sequence is also neatly executed. The innocence between the lead characters and their kind relationship of togetherness fills the path. The emotions are carried in a delicate manner. The tortoise situation is out-of-the-box and the ‘Tea’ dialogue is exceptional. You will have to see the film to get a fulfilling satisfaction.

The final act features a married couple played by Samuthirakani and Sunainaa who have three children. As like many couples in a society, these two also undergo a similar problem of not having a mutual understanding. It might sound as a simple line, but the detailing and the in-depth characterizations make it an exciting chapter of life. Their problems easily connect with the audience. The family portions and the kids’ humour scenes are neatly handled. Samuthirakani might scare with a message-heavy face as soon as he appears on-screen, but he has done something clap-worthy here, thankfully by not preaching us anything, but by living his role to perfection, in a natural way.

The common things which all the stories had - Pradeep Kumar’s music (no songs) just drives the film in a soothing way and the elevation it gives to the film is truly fantastic. All the four cinematographers (Abinandhan Ramanujam, Manoj Paramahamsa, Vijay Kartik Kannan, Yamini Yagnamurthy) have wonderfully canned the shots and the mood is beautifully set with some eye-pleasing visuals. The edit is little messed up as we get to witness jump-cuts at places that look odd.

The writing is seamless and the scenes are meticulously placed with relevant and instantly attractive dialogues. The casting is absolutely brilliant and every artist outperforms the other. The characters, their behaviour, their views about life and people are highly relatable. The film spreads positivity and gives immense hope on life and relationships. The technology is also approached on a good note. Kudos to director Halitha Shameem for creating a beautiful slice of life romantic drama that is sweet and positive throughout.

[NOTE: Reviewed after a special screening at the 17th Chennai International Film Festival. The film will have its theatrical release on December 27]

Verdict :A beautiful romantic-drama anthology that is sweet and positive, spreading a ray of hope in life!

Sillu Karupatti is a Tamil movie. Samuthirakani,Sunaina are part of the cast of Sillu Karupatti. The movie is directed by Halitha Shameem Music is by Pradeep . Production Divine Productions.