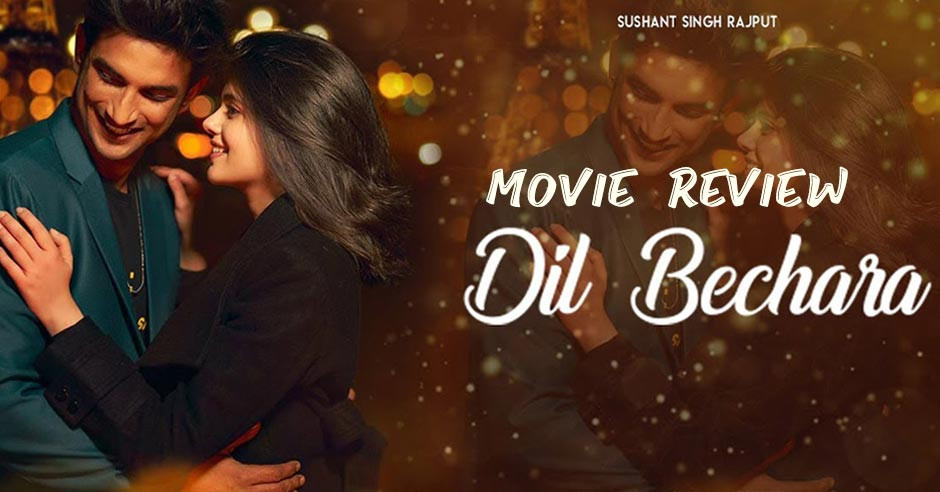 Dil Bechara is looked as something beyond being just a film, it would be insensitive to be critical about the film, given the state people are in right now. Though the film has quite a few issues like the depth in the screenplay, dull feel overall in colour tone, and so on, we do not wish to dig deeper into this issue at the moment since it could be against the sentiment of people. Considering the situation, we have come up with a no-hate review, which only talks about the positive aspects of the film. Dil Bechara is undoubtedly a fitting end to Sushant Singh Rajput’s acting career, which we wish had not ended so prematurely at all. The actor, with his mere presence, would make you cry. More than the story, more than the emotional setting, seeing him on screen for one last time would make your heart feel heavy.

The film has enough charm and humour to keep it appealing to a wide audience and Sushant is a master when it comes to keeping the mood lit. He is the sole attraction of the film, despite Sanjana Sanghi trying her best to give life to her role. But for obvious reasons, your eyes don’t see anything but Sushant Singh Rajput. The greatest strengths of the film clearly come from the actual novel, the soul in the script that differentiates the film from other typical clichéd dramedies. The two vibrant, believable young characters Manny and Kizie, make the film sweet and cute right through. We end up wishing to see them a little longer. The original English film The fault in our Stars, was 30 minutes longer and much detailed. This movie ends before we get immensely connected to the characters.

There are a few standalone scenes in the film that deserve a special mention; the scene where Sushant asks Sanjana to give a eulogy for his death. The scene where Sushant breaks down for the first time in Paris. The single shot title track song performance by Sushant, and many more such fun moments where Sushant lifts the mood of the script with his humour and presence. Saswata Chatterjee and Swastika Mukherjee, who played Kizie’s parents, offered exactly what was asked from them. Their roles were mixed with humour and emotions. This film would have been incomplete without their contributions.

Coming to the technical aspects, the soundtrack and background were tailormade for the script. It was perfect and never seemed overpowering at any point of time. AR Rahman has used silence to good effect, letting the actors perform without any distractions. The BGM for Sushant Singh’s intro was fun and catchy, even the end credits surprise track added a lot of value to the proceedings. AR Rahman has once again proven that Bollywood can still make songs without remaking classics to give a blockbuster album.

Verdict: Dil Bechara is a short and heartwarming journey that rides solely on the more-than-broad shoulders of Sushant Singh Rajput!

Dil Bechara Surprise! Have you seen this new video of Sushant Singh Rajput yet?!