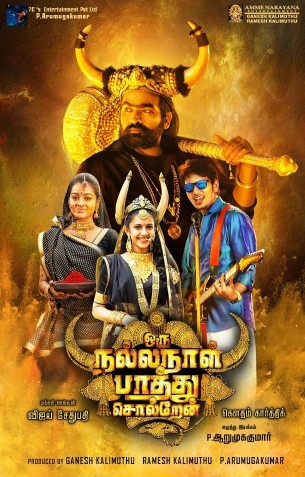 Oru Nalla Naal Paathu Solren is an adventure comedy film directed by Arumuga Kumar and stars Vijay Sethupathi and Gautham Karthik in the lead roles along with Gayathrie Shankar and Niharika Konidela as the female lead stars.

Comedy is a tough nut to crack and the task becomes more daunting when it’s for a full length film. Similarly, Oru Nalla Naal Paathu Solren released today set in the genre has done its job of putting forward a story on the table that is both engaging and entertaining.

The film starts off with Vijay Sethupathi and his friends hailing from a village named Yamasingapooram in Andhra Pradesh and they make robbing households their job. On one such occasion, when they enter a home to steal, Vijay Sethupathi comes across a picture which he then proceeds to take a photograph of. It is revealed the person in the photograph is Niharika Konidela, who Vijay Sethupathi goes on to say he will marry.

We are introduced to Gayathrie Shankar, who has been in love with Vijay Sethupathi for a long time, but her advances are not given any attention by him. Gautham Karthik is brought into the story as a fun-loving youngster, who is good friends with Niharika, who then begin a relationship in due passage of time. Despite life moving smoothly between the two, Gautham Karthik wanting to impress Niharika, approaches Vijay Sethupathi to stage a kidnapping incident where he could step in to save the day. How the events unfold from this point forms the crux of Oru Nalla Naal Paathu Solren.

This is a movie that will hit you with a plot that sounds similar, but the way it is treated has a fresh feel and approach. Vijay Sethupathi does it again and there is no idea whether he is clever enough to choose movies like this to elevate him as a performer or he is just lucky to have these scripts fall in place for him.

Although Gayathrie appears in the film, her role could have had more depth. However, the actor fills in that space with her consistent performance and her scenes with Vijay Sethupathi make us believe their pairing on-screen is one of the best ever in Tamil cinema till date. Niharika Konidela comes in as a pleasant breeze on the big screen and we fall in love with her instantly and her cute expressions. Although the plot is centered around her, the film should have featured her a lot more.

The biggest revelation in the film without a shadow of a doubt is Gautham Karthik, who has pulled off an exceptional performance with his humorous antics. Each time he sets out to do something, we can be assured a hilarious outcome is in the offing and we aren’t disappointed one bit.

Supporting cast members Daniel Annie Pope and Ramesh Thilak too have delivered on the front making us think about their characters even after the film has ended.

Oru Nalla Naal Paathu Solren works out in what it has set out to do - keep audiences engaged with hilarity. The film’s story is simple, but the manner in which the screenplay has been penned by director Arumugakumar needs to be lauded. AK Muthu’s art direction stands out and at no point do we get the feeling the sets built for the tribal village as being artificial. Editing by R. Govindraj and cinematography by Sree Saravanan is on point and the two have complemented with what would work best for the overall look of the film. Justin Prabhakaran’s songs are enjoyable, but he rises to the top and shines in the background score department.

In what works best for Oru Nalla Naal Paathu Solren, the film is a straight up comedy flick that will leave you in splits for a majority of the duration.

Niharika Konidela’s character could have been a bit more elaborate

Verdict :Roaring fun all the way!