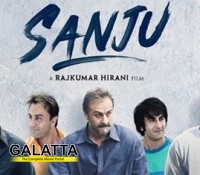 Anushka Sharma is an author who is requested to write the life history of actor Sanjay Dutt. She gathers his life moments from various people including the actor himself to convert it as a book.

Rajkumar Hirani’s intention to make a film on the controversial actor is highly appreciable. Sanjay Dutt has to be applauded to have permitted to showcase the criminal truths that he did in his life. The narration pattern is stunning, contains certain nuances between back and forth.

Direction is merely perfect and the way Hirani has layered this life story makes it a memorable outing. Script has enough potential to stay connected with the hearts of the viewers. Screenplay is engaging till breakpoint, takes an uplift after that and becomes highly gripping throughout the later half.

There is plenty of talking, mainly explanations in the form of sensible and to-the-point dialogues. Hats-off to the writers for incorporating all the necessary factors that would be tailor-made for creating a wonderful biopic.

Ranbir Kapoor has delivered his career best performance. He has literally lived as Sanjay Dutt in every possible frame. His dialogue delivery, walking style, respective eyebrow shape are all significant.

Paresh Rawal played as Sanjay’s father has provided a rocking performance and his characterization is splendid as well. Vicky Kaushal catches the eye with quality acting and a matured truthful friend for Sanju. The emotional sequences of these two with Dutt leads to tears.

Anushka Sharma, Sonam Kapoor, Manisha Koirala and Jim Sarbh have crucial roles to play. They score well within the given limited space. Dia Mirza who is cast as Sanjay Dutt’s wife has less depth in character and doesn’t impress much.

Songs are decent, but could have been a lot better considering the film has plenty of scope for music. Background score is great, compositions seems to have proper planning with respect to the situations.

Ravi Varman’s camera work is lovely and the team effort looks fantabulous with choice of colors, lighting, etc. Director Rajkumar Hirani himself edited the movie, so he has got a better understanding of the flow. His work at the edit table is also a key factor for the movie’s steady pace.

Departments like art direction, hair-styling, costume designers and make-up men deserve a pat on their backs for doing an appropriate job by realizing what the movie actually requires.

The start was kind of slow. Portions of Sanjay Dutt being a womanizer is not explored that clearly. Also his marriage details were not shown. Even his cinema career was not shown in a detailed manner.

Plenty of true facts have been conveyed excellently without any compromise. Bringing in some mysterious moments towards the end was a good idea. Pre-climax sequence leave a strong impact as the sentiment portions have been handled with superb care.

How newspapers and other forms of media have played in Dutt’s personal life brings are treated with authenticity. Also, some true hidden colours of Sanjay Dutt which the world is not familiar with is brought to light. Munna Bhai MBBS segment and the award function scene post that is macho to watch.

There are certain powerful scenes which will stay in our hearts for a long time. End credit song is beautifully conceptualized with a bang on surprise.

Shortage in details on Sanju’s wife & his professional life

First half moved in an unhurried pace

Verdict: Such a moving and gripping biopic with master storytelling & stunning performances.

Unbelievable transformation of Ranbir Kapoor for his next - catch the first glimpse here!

Ganguly biopic officially confirmed - check out who is the favorite to play the role!

"According To Sources Could Spoil Someone's Life": Manjima Mohan