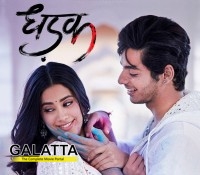 Ishaan works part time at a restaurant. Janhvi is Politician’s daughter. They both study at the same college situated at Udaipur. They fall in love after several meetings. What happens in their lives after the parents come to know about their relationship forms the crux of the story.

Script is very simplistic, but the shocking climax and the social message listed post that makes it meaningful. Such an heart-touching ending is nowhere hinted in the flow, that stands as the victory mark of this movie. Shashank Khaitan’s direction is uplifts the situations, he has staged all the elements in a neat way.

Screenplay does the trick to engage an audience, it has at least something to offer at every scene to all sorts of viewers. The base is strongly set as the lead characters have given enough space to establish themselves and chemistry between them is conveyed clearly. Dialogues are apt, few silently leftover places deserve applause.

Debutantes Ishaan and Janhvi’s performances are refreshing, they do suffer to replicate few respective situations on screen through their emotions, but over the acting is decent and the male lead as done well at most portions. Scenes which make their love travel along us are pretty decent and the two friends of the hero have provided so much entertainment in both the halves.

At times, the progression seems to be slow and patience level is tested mainly in the middle of the later half. Few major sentiments get carried away so gently, also the emotions are received in the opposite angle by the viewers that happens to be the main drawback to the narration. Passing on certain crucial life situations through one song gives an awkward feeling.

Music stands out of the box, songs are impressive and pleasant to listen. Background score is soulful at many situations. Cinematography enlightens the mood, the colours used are catchy, the angles set for the serious climax is haunting, but slightly predictable too. Editing draws the middle line and leaves the comment to public as some might feel it is engaging and for some it might be a slow burn.

Interval scene could have delivered with much more concentration as it looks like there is a lack of execution plan at that particular portion. Few acts are found to be mindless irrespective of the drama happening. Also, the emotional fights in the latter just fills up the gap without any properly sketched motive.

Villain characterization is so unnaturally portrayed on screen. The upliftment to the context fixed is not transmitted at any point of time. Detailing is heavily missed, also there are some unanswered questions regarding the supporting characters play.

Bang on climax with effective message

Lack of details about supporting characters

Verdict: Well taken romantic drama that is fun and effective at the same time

Karan Johar's take on the current trend of pan Indian films. Check out his unmissable reply!

10 young actresses who can become the star heroines of tomorrow!

10 young actors who can become the superstars of tomorrow!

A Prayer Meeting For Sridevi In Chennai