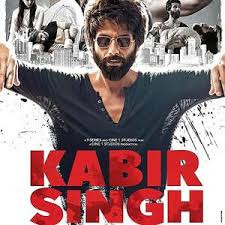 Arjun Reddy, the Telugu movie which released in 2017, was a cult hit and the movie's director Sandeep Reddy Vanga has now brought it to Bollywood as Kabir Singh, with Shahid Kapoor and Kiara Advani in the lead. Produced by Cine1 Studios and T-Series, this movie has editing by Aarif Sheikh and cinematography by Santhana Krishnan and Ravichandran.

Kabir Singh (Shahid Kapoor) is a brilliant surgeon with anger-management issues, whose life has taken a downward spiral with alcohol and drugs, after the love of his life Preeti (Kiara Advani) is married off to somebody else because of the caste difference. Kicked out of his house, sustaining life on a haze of intoxication and with only his friend Shiva (Soham Majumdar) by his side, Kabir seems to have lost it all. He goes about trying everything from intoxication to getting physical with random women to fill the void left by Preeti but is still unable to get over her. Watch what happens next, in Kabir Singh!

Director Sandeep Vanga has stayed true to his original Arjun Reddy, in an almost frame-to-frame remake in Kabir Singh. There have been very minor changes with the most notable being cutting off the Italy vacation sequence and replacing the holiday destination in Kabir Singh to be just a few kilometres away on the outskirts of Mumbai. Shahid Kapoor has given an intense portrayal and is brilliant as Kabir Singh. The passion, love, loss, helplessness and pain have all been beautifully conveyed throughout, in his emotions. However, for those who have watched the original Arjun Reddy, it only brings back memories of Vijay Deverakonda. Though Kiara Advani has very less scope to showcase a wide range of emotions, she shines brilliantly in the few scenes where she does get into the spotlight, especially the climax.

Soham Majumdar is one of the standouts in Kabir Singh and his effortless portrayal of a true and loyal friend, displaying a wide gamut of emotions is nothing short of wonderful. His subtlety in some portions make for great viewing. The rest of the characters have very little to do and have stuck to their tasks. The songs in this movie, especially the 'Kaise Hua', 'Bekhayali' and 'Tujhe Kitna Chahne Laga' numbers are top-notch and elevate the movie. The dialogues too are almost exactly similar to the ones in Arjun Reddy but the comedy one-liners are very good. Though this movie is all about Kabir Singh and even the original had all the same scenes, the rampant abuse of women and taking them for granted does seem a little over-the-top. When Kabir Singh keeps repeating that despite the year being 2019 Preeti's father is still looking at caste difference as an issue for their marriage, it could also have been taken into account that in this year and age, women should still not be treated so repressively.

Kabir Singh is a Hindi movie. Kiara Advani,Shahid Kapoor are part of the cast of Kabir Singh. The movie is directed by Music is by . Production .