Priya Bhavani Shankar is one of the most sought after heroines in Tamil cinema and she has got several interesting projects in her lineup. One of the highlight projects happens to be Pathu Thala which features Silambarasan TR and Gautham Karthik in the lead roles. The film, which happens to be the remake of the Kannada film, Mufti, is directed by Krishna of Sillunu Oru Kaadhal fame. Produced by KE Gnanavel Raja under the banner of Studio Green, this action drama will have music scored by the legendary, A.R.Rahman. The shooting of this film is expected to resume when the Covid 19 situation comes under control in the state.

Meanwhile, Priya Bhavani Shankar interacted with her followers and fans on Instagram and answered to a lot of interesting questions. During the interaction, one of the fans asked her to share a few words about STR with whom she is going to share screen space very soon. Talking about it, Priya replied, "Speaking fondly, STR as our school time crush for a group of girls and school bunk pannitu we watched 'Saravana' in Rohini theatre in our school uniform". This reply from Priya has gone viral among the fans and it has garnered good attention. It is indeed interesting to know that Priya was a fan of STR during her school days and the highlight aspect in the answer is definitely the bunk.

However, Priya Bhavani Shankar is paired opposite Gautham Karthik in Pathu Thala. Priya Bhavani Shankar has already completed the shooting and waiting for the release of movies like Kuruthi Aattam (Atharvaa), Oh Mana Penne (Harish Kalyan), Bommai (SJ Suryah), Hostel (Ashok Selvan), Kasada Thapara, and more. Her other notable films which are in different stages of production include Rudhran (Raghava Lawrence), AV 31 (Arun Vijay), and an untitled film directed by Sarjun KM of Airaa fame. Priya is also a part of ace director Shankar's next, Indian 2. For now, check out her latest reply about STR here: 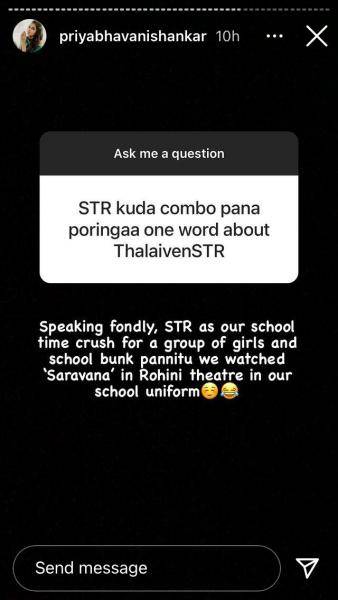