The problems between Vaigaipuyal Vadivelu and director Shankar (with regards to Pulikesi 2) were resolved recently with an amicable solution and the Tamil Film Producers Council also withdrew the red card that was issued against the legendary actor. This development came as delightful news for the fans and the entire social media is abuzz about it. As all the issues are now sorted out, it looks like Vadivelu is all set to get back to action. Yes! The much-loved comedy actor will be teaming up with director Suraj for his comeback film and this new film is titled Naai Sekar, named after Vadivelu's character in Thalainagaram.

Director Suraj, who is known for making movies like Thalainagaram, Marudhamalai, Padikkadhavan, Mappilai, Alex Pandian, etc, happens to be a good friend of Vadivelu. This new film will be bankrolled by Lyca Productions on a grand scale. Director Suraj officially confirmed this news through a Facebook post in which he wrote, "Yes it’s official !!! My 11th big film with #vadivelu and #lyca #Naaisekar is back 😎". This film will be edited by Selva RK who is known for his work in critically acclaimed movies like Sarpatta Parambarai and Karnan. Details regarding the rest of the cast and crew are yet to be known.

The shooting of Naai Sekar is expected to begin in September and more details are awaited. The film is said to be a fun-filled comedy entertainer. Vadivelu will also be acting as a comedian in three upcoming biggies for which we can expect formal announcements very soon. It has been a pretty long wait for the fans to see Vadivelu back in action and this update has definitely turned out to be a treat for them. Vadivelu was last seen in Thalapathy Vijay's Mersal, directed by Atlee and produced by Thenandal Studios Limited. For now, check out the official announcement on Vaigaipuyal Vadivelu's comeback film with director Suraj here: 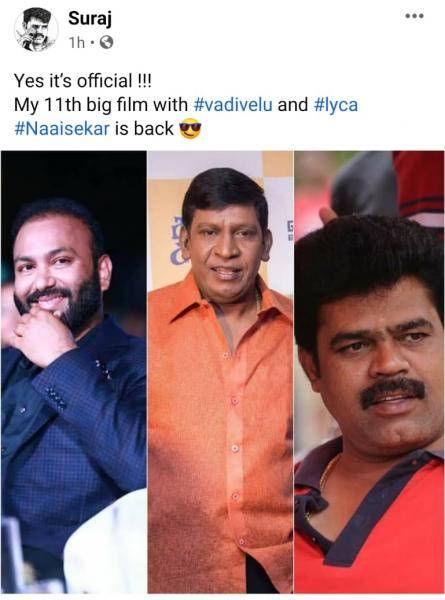