Ajith Kumar has got two hit films at the box office this year in the form of Viswasam, the emotional rural drama, and Nerkonda Paarvai, the intense courtroom drama. The star actor is now gearing up for the shooting of his next biggie, Valimai, which will be directed by H Vinoth and produced by Boney Kapoor. Bankrolled under the banner of Bayview Projects LLP, this action thriller was officially launched last month with a special pooja. Since then, the fans have been eagerly waiting for some updates from the camp of Valimai.

The team maintained silence and concentrated on the pre-production works of the film. We now have a new update about the film that will put the fans in smile. Our sources have informed that the shooting of Valimai is scheduled to begin from December 13. However, there are also mild chances of the film beginning to roll from December 10. An official word from the team will provide more clarity on this. 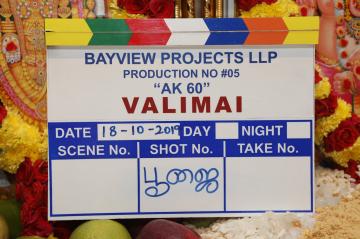 The film has music by Yuvan Shankar Raja and cinematography by Nirav Shah. Ajith is rumoured to play a cop in this stylish action thriller which is planned to be shot majorly in foreign locales.