Official: It is a wrap for the stunt/action sequences of Superstar Rajinikanth's Annaatthe

Superstar Rajinikanth's Annaatthe is one of the most anticipated films of this year and the movie is expected to take the box office by storm. Annaatthe is directed by Siva of Viswasam fame and has music composed by D Imman. Sun Pictures is bankrolling this mega action entertainer that features an ensemble star cast, including the likes of Khushbu Sundar, Meena, Keerthy Suresh, Nayanthara, Prakash Raj, Soori, Sathish, Jagapathi Babu, Abhimanyu Singh, and others. The shooting of the film is nearing completion and the team is just left with a few more minor portions to be shot. The film has cinematography by Vetri and editing by Ruben.

As the final leg of shooting is currently progressing, popular stunt choreographer Dhilip Subbarayan took to his official social media page to share an exciting update on the Rajinikanth starrer. Dhilip revealed that the shooting of all the stunt sequences in Annaatthe has been wrapped up and it looks like the young talent's work in the film will be highly talked about. Thanking the entire crew of Annaatthe for the support, stunt choreographer Dhilip Subbarayan wrote, "#Annatha action sequences finished Thnxs to my action team & Thnxs siva sir Vetri Palanisamy sir Milan Fernandez sir sun pictures direction department Dop team and all crew members 💪" .

With this being said, it looks like just the talkie portions are left to be completed and the team will be looking to wrap it up soon. Annaatthe is said to be a story that will deal with the relationship between a brother and his younger sister. Keerthy Suresh will be seen playing Rajinikanth's sister in the film and she is said to have got a significant character. Annaatthe is expected to showcase Rajinikanth in a new dimension as it has been a long time since we saw him in a full fledged rural film. Annaatthe is slated to release in theatres on November 4 for the festive occasion of Diwali. For now, check out the latest update on Rajinikanth's Annaatthe here: 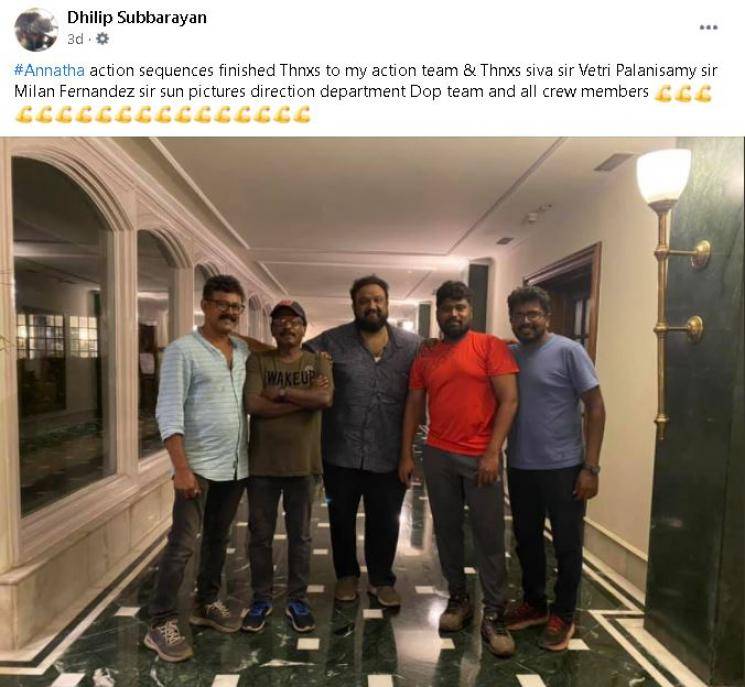