One star who stirs up the expectations and excitement surrounding anything he does is 'Thalapathy' Vijay as the actor has over the years not only carved a niche for himself as a powerful force to reckon with in the Tamil film industry, but has also established himself as a brand as he has delivered several massive box office blockbusters, with his latest mass action entertainer Master released earlier this year reviving the theatre business around Tamil Nadu after the film-going experience took a slump due to the pandemic. Vijay, who is at present filming his upcoming film Beast with Kolamaavu Kokila director Nelson Dilipkumar under the Sun Pictures banner, was revealed sometime back to be collaborating next for Thalapathy 66 with blockbuster Telugu filmmaker Vamshi Paidipally, known among Tamil cinema fans for his Thozha with Karthi and the Mahesh Babu-starrer Maharshi.

Earlier in late May this year, Vamshi during an interaction with Telugu media stated that he would be teaming up with Vijay for a speculated pan-Indian venture under reputed Telugu producer Dil Raju's production banner once he completes filming Beast, while adding that an official announcement regarding the same would be made at an appropriate time. As the debate among fans continues on Thalapathy 66, noted Tamil singer and actor Krishh on Tuesday sent across his birthday wishes to Vamshi Paidipally, while also conveying the best for his next with Vijay. He tweeted, "Happy Happy Birthday to One of my Favorite Person & Director @directorvamshi Have an Amazing Year a head my Friend.. Waiting & Best wishes for your next with @actorvijay Anna...". Krishh deleted the tweet soon after it went viral on social media, with fans now affirming in hope that Vijay will indeed be joining hands with Vamshi next. Below is a screenshot of Krishh's tweet: 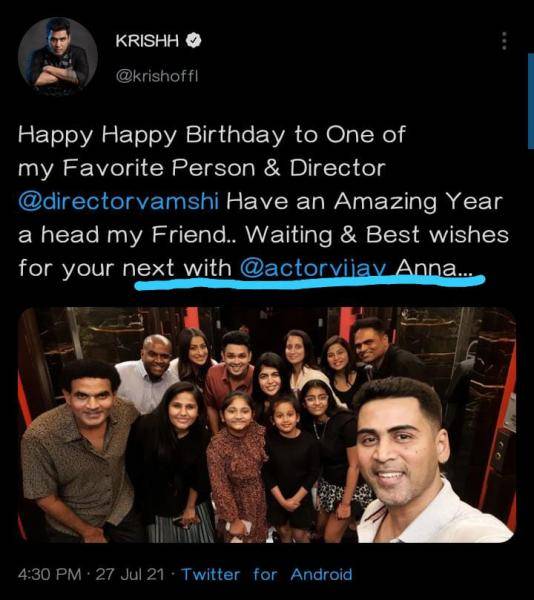 Geeta Basra And Harbhajan Singh reveal the name of their baby boy - Check out!