Poove Poochudava is a widely popular Tamil television serial that gets aired regularly on Zee Tamil. This serial features Reshma Muralidharan, Karthick Vasu, Krithika Laddu, Madhan Pandian in the lead roles. Meena Kumari, Uma Padmanabhan, Dhanalakshmi, Kousalya Senthamarai, Santhosh, Chandini Prakash, Diwakar, Priya, Madhumohan, and others form the supporting cast. Poove Poochudava, which is the remake of the Telugu serial, Varundhini Parinayam, has crossed over 1110 episodes and is running successfully for the past four years. Reshma Muralidharan plays the female lead in the serial and her character is called Shakthi.

Through the character of Shakthi, Reshma Muralidharan has earned a phenomenal fan base and her performance has also struck a chord with the audience. Very recently, there were rumours claiming that Reshma Muralidharan has walked out of the serial and she would be replaced by another actor in the coming days. This news worried a section of the fans. However, the news has been denied by actress Reshma Muralidharan. Yes! The young and talented actress took to her social media page to share her statement regarding the rumour and clarified that there is no truth to the speculations.

Reshma also requested people not to spread false and baseless rumours on social media. Her clarification statement read, "There is rumour spreading that me (Shakthi) in Poove Poochudava gonna be replaced by another actor but it's completely a fake news. Don't worry will be back. Pls don't spread rumours". This statement from Reshma has come as a big relief for her fans who are now looking forward to seeing her in the serial again.

During the filming of Poove Poochudava serial, Reshma Muralidharan fell in love with actor Madhan Pandian, who plays the character of Sundhar. At the beginning of this year, Reshma confirmed her relationship with Madhan and added that they would be getting married very soon. For now, check out the screenshot of Reshma's clarification statement regarding Poove Poochudava serial here: 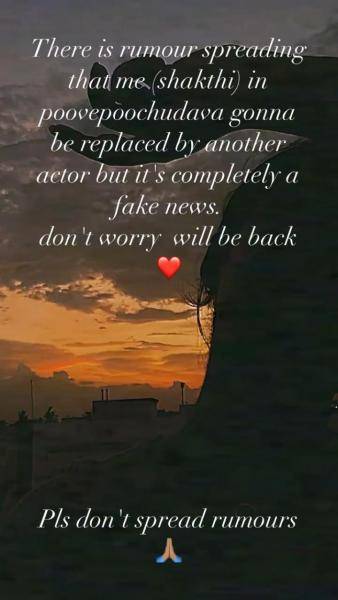 OFFICIAL: Kiruthiga Udhayanidhi teams up with Kalidas Jayaram for her next film!