Director Alphonse Puthren opens up on Malar regaining her memory in Premam climax - Check out!

A film that continues to be after its release in 2015, the Malayalam blockbuster, Premam, starring Nivin Pauly, Sai Pallavi, Madonna Sebastian and Anupama Parameswaran, has gone on to become a cult classic for many. The coming-of-age romantic drama directed by Alphonse Puthren recently celebrated its sixth anniversary, with many fans once again taking to social media to share their love for the film. Among the many who have adored the film, one fan took to Facebook to query Alphonse about the Premam climax, where it was a bit unclear for some as to whether Malar played by Sai Pallavi had lost her memory or not.

Alphonse Puthren, who is currently working on his next film titled Paattu with Fahadh Faasil and Nayanthara in the lead roles, informed fans that Sai Pallavi as Malar indeed lost her memory in Premam.  He also spoke about how Malar gave her approval for the George David (Nivin Pauly) and Celine (Madonna Sebastian) pairing with her "super" reply, which eventually makes him realize that she has regained her memory once again. Alphonse wrote, "She had lost her memory. When she gained she might have spoken to Arivazhagan . When she reaches there she feels George is happy with celine. But with the " super" George understands that she has regained memory . This is not told in dialogues . But I have showed in action and the music with harmonica replacing the violin this time. Hope your doubt is cleared. The answer... It is the last one in your questions . Got her memory back recently..." Check out the complete conversation below: 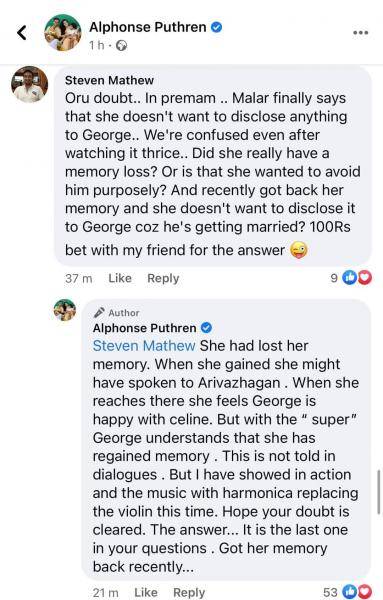