Up-and-coming actress Pavithra Lakshmi has become a sensation and a youth heart-throb across Tamil Nadu of late, especially after her appearances on the hit Vijay TV cooking reality TV show, Cooku with Comali season 2. The ongoing edition of Cooku with Comali has turned out to be a huge success on the lines of the first season, with Pavithra being a major highlight and her presence bolstering the viewership. One of the most followed celebrities now in the Tamil entertainment industry, Pavithra's popularity has shot up and so have a number of fake social media accounts in her name on Facebook, Twitter and Instagram.

In that light, there have been a few who have been posing as Pavithra Lakshmi on social media, with the actress taking to her Instagram page to raise awareness on a fake Twitter page that commented for the 'So Baby' song announcement from the upcoming Sivakarthikeyan-Priyanka Arul Mohan starrer, Doctor, under Nelson Dilipkumar's direction and featuring music by Anirudh Ravichander. Pavithra posted a screenshot of the tweet on her Instagram Story and informed her followers about her real and only Twitter account with the id: @itspavitralaksh. It is to be that this is the second time Pavithra has given a clarification on her original and only Twitter handle after she posted a video last month explaining fans about the various fake accounts.

Pavithra Lakshmi's stint on Cooku with Comali season 2 is turning out to be a highly-successful one as she has avoided getting eliminated for the 28 episodes telecast and streamed so far since the show kicked off its ongoing edition in November last year. With more to come on Cooku with Comali, Pavithra, whose previous acting credits include the short film, 3 Scenes of his Love Story, will next be seen in the Malayalam film Ullasam, which has Shane Nigam in the lead role. Check out below Pavithra Lakshmi's Instagram Story about the fake Twitter handle: 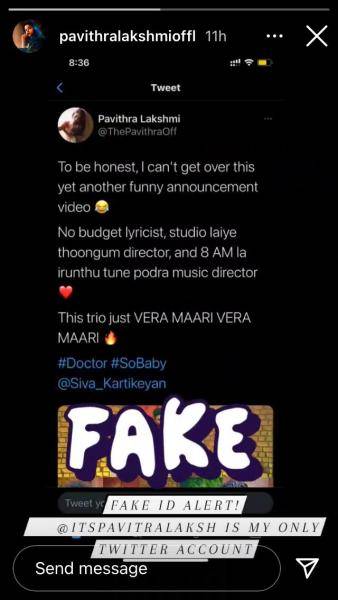