The Vijay TV serial Pandian Stores has been one show that has garnered a big fan following since it began its telecast in 2018, with more than 600 episodes broadcast to date, including receiving a huge viewership on the OTT streaming platform Disney+ Hotstar. The family drama, which revolves around four brothers - Jeeva, Kadhir, Kannan and Murthy - has received a lot of adoration over the past three years, with a lot of twists and turns during the course of its run so far, which has attracted the attention of both the young and the elderly alike. As Pandian Stores continues to enjoy its run, actor Saravana Vickram who plays the character Kannan, has sustained an injury during the shooting of the show.

Saravana Vickram’s sister Surya took to Instagram to inform fans and followers that her actor-brother had met with an accident on the Pandian Stores set. Posting an Insta Story, Surya wrote, "While shooting of the ongoing wedding scenario in Pandian Stores, my brother met with a small accident (while driving) and got injured. But he went back to the shoot within 4 hours with lots of pain throughout his body, he was not able to walk properly for few days… Not even he showed his pain to his team, but his performance in acting was intact despite of the accident. After seeing his determination and grit I was really proud of him. Such a gem he is, hats off to you Annae, keep inspiring me. And special thanks to all his fan family for your endless love & support." Check out below Surya's Instagram Story on Saravana Vickram’s health condition: 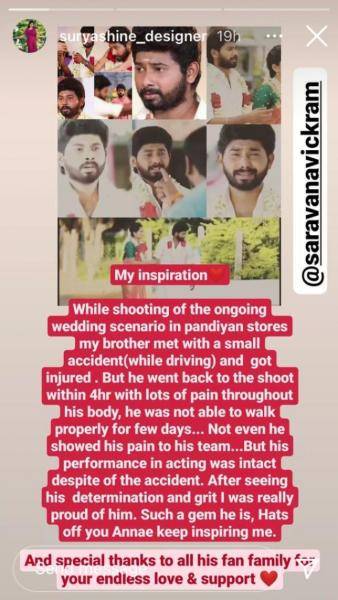