Popular Malayalam television actress Parvathy Vijai, known best among fans for playing Sheethal Menon in the smash hit serial Kudumbavilakku, has announced her pregnancy. The news was also shared on social media by her sister and actress Mridhula Vijai, who as well is mighty excited to welcome the little one and is known for starring in the Malayalam serial Pookalam Varavayi. Parvathy and her sister Mridhula Vijay are known for their photoshoots and lip-sync videos, which have garnered them a huge fan following over the years. Posting a picture of her baby bump, Parvathy wrote, "My body has given me the greatest gift of my life,", with Mridhula sharing it on her Instagram Story and captioning it: "Hey my lil kutty, your mema is waiting". Check out the photo below: 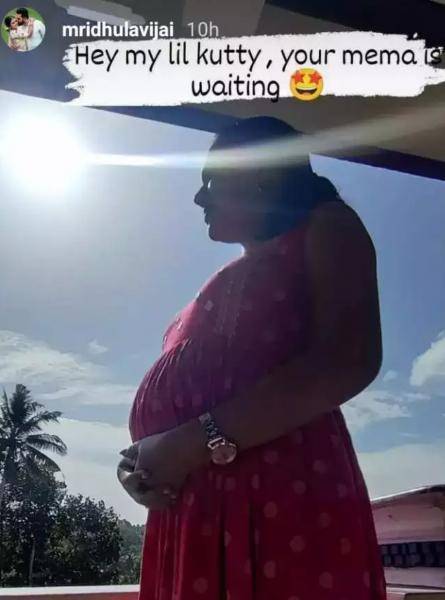 Parvathy Vijay tied the knot with Arun in July last year after the couple had reportedly fallen in love on the sets of Kudumbavilakku where the latter was working as a cameraman. The serial, which has aired over 400 episodes to date, marked the acting debut of Parvathy, who quit the show after her marriage. The wedding was a low-key affair and the ceremony was held in accordance with traditional Hindu rituals. Parvathy played the role of the daughter of the protagonist Sumithra Menon, who was portrayed by actress Meera Vasudevan. Kudumbavilakku has become a huge success on Malayalam television, with the show also being adapted in other languages, with the Tamil version titled as Baakiyalakshmi and airing on Vijay TV.

Samantha gives her nod for a big film with debutant director - Massive update!