Director Karthick Naren’s last release, Mafia: Chapter One, opened to mixed reviews from the critics and fans. A section of critics had pointed out that more depth in the writing and the screenplay could have Mafia, an even more fulfilling film. It looks like Karthick has indeed noticed the constructive criticism and has decided to collaborate with writers for his next film. Yes, it is a known update that Karthick Naren would be directing Dhanush’s D43, produced by Sathya Jyothi Films. Karthick, in a live chat session with his followers on Instagram, revealed that he is collaborating with two writers, Sharfu and Suhas for D43.

For the uninformed, Sharfu and Suhas are the writers duo who have worked together in acclaimed Malayalam films like Varathan (Fahadh Faasil starrer) and Virus (Aashiq Abu directorial). Karthick also added that D43 will be a thriller drama and going by the updates, we can expect a riveting thriller that will be strong on content. D43, which is expected to take off by the middle of this year, is tentatively scheduled to hit the screens in October.

The film has music scored by G.V.Prakash Kumar, who is riding high on the success of Asuran and Soorarai Pottru (songs). The young composer turned actor had recently revealed that two tunes have been locked for the film. Get set for an exciting film! Check out Karthick Naren’s reply post below: 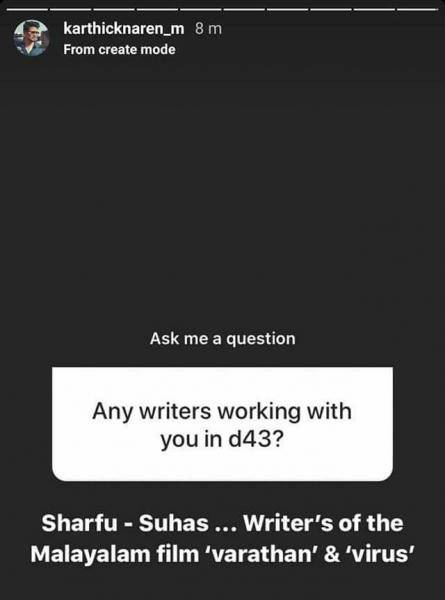