Karthi is right now basking on the success of his last release, Kaithi, which came out for the festive occasion of Diwali. His next release would be his film with director Jeethu Joseph of Drishyam and Papanasam fame. Karthi is sharing screen space with his anni Jyotika for the very first time and the project made the fans excited ever since its announcement. Karthi and Jyotika will be seen as siblings in this mystery crime thriller which has Sathyaraj playing the duo's father character. 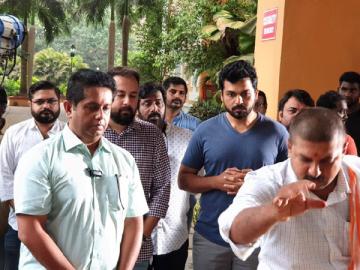 The makers have now revealed the film's title along with the first look poster. As speculated earlier, this film has been titled as Thambi and it will hit the screens next month, December 2019. Thambi's first look poster looks interesting with Jyotika and Karthi's powerful eyes having a place on both the sides of the poster.

The film has cinematography by ace lensman R.D.Rajasekhar, while the music is composed by 96 fame Govind Vasantha. The music rights have been acquired by Lahari Music. Our sources inform us that the makers are planning to release the film on December 20th and if things go as per plan, we can expect the film to release along with Sivakarthikeyan's Hero. Get set for an intriguing thriller, this December!