Director Gautham Vasudev Menon has also become a busy actor these days, signing several exciting projects. He acted in a full-fledged role for the first time in Dulquer Salmaan's Kannum Kannum Kollaiyadithaal and his performance in the film received highly positive reviews. Up next, the star filmmaker will be seen acting in Mohan G's Rudhra Thandavam and GV Prakash Kumar's Selfie. Meanwhile, Gautham Menon has acted in one more new film and an official confirmation on the same is out! The Vinnaithaandi Varuvaayaa director will be seen playing an extended cameo in Sivakarthikeyan's upcoming comedy entertainer, Don, directed by debutant Cibi Chakaravarthi.

Director Cibi took to his official Instagram page to share the good news and he sounded excited about it. It is indeed going to be exciting to see Gautham Menon in a youthful comedy entertainer and let us keep our fingers crossed and wait for a few more months to witness his performance. Don features Doctor fame Priyanka Arul Mohan as the female lead, while SJ Suryah will be seen as the antagonist. The film's supporting cast has prominent names like Soori, Munishkanth, Bala Saravanan, Mirchi Vijay, Cook with Comali fame Sivaangi and others.

Produced by Lyca Productions in association with Sivakarthikeyan Productions, the film has music scored by Anirudh Ravichander and cinematography handled by KM Bhaskaran. The majority of the shoot is already completed and the team is left with a few more portions to wrap up the entire film. Don will feature SK as a college student for the very first time and the fans are eagerly waiting to witness the star actor's performance in the film.

Apart from Don, Sivakarthikeyan also has films like Doctor and Ayalaan getting ready for release. Doctor will hit the screens on October 9, while Ayalaan is currently in the post production stage. For now, check out director Cibi's confirmation on Gautham Menon's presence in Don here: 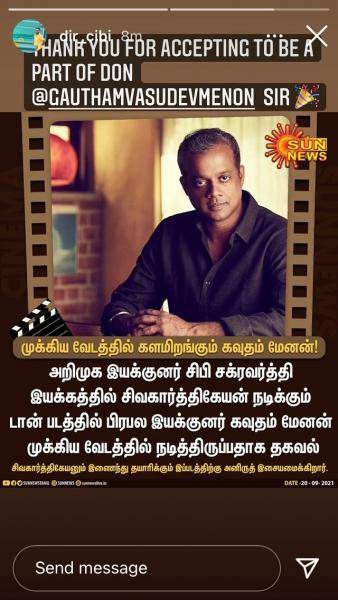