Music composer Darbuka Siva made his silverscreen debut with the 2016 rural action drama, Kidaari, in which his work stood out and garnered the attention of the critics. Later, he became a very popular figure with the blockbuster success of his songs in the yet to be released Dhanush starrer, Enai Noki Paayum Thota, directed by Gautham Vasudev Menon. The stupendous success of the ENPT album made Darbuka Siva a known figure among the youngsters and music lovers.

The talented composer ventured into direction, a few months back, and the project was tentatively called MNMN. The team has now come out with the full title of the film and it is called Mudhal Nee Mudivum Nee. Yes, MNMN stands for Mudhal Nee Mudivum Nee, named after the lyric in the 'Maruvaarthai' song from ENPT composed by Siva. This debut directorial of Darbuka Siva features a fresh set of newcomers as the leads and the film is said to be a breezy musical romantic entertainer. 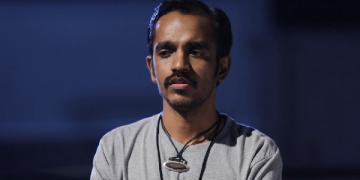 Bankrolled by Sameer Bharat Ram's Super Talkies, this film has Dhuruvangal Pathinaaru, Dear Comrade fame Sujith Sarang and Sreejith Sarang as the cinematographer and editor respectively. The title look poster of Mudhal Nee Mudivum Nee was released yesterday (November 8) and it looked completely classy. The film's audio rights are bagged by Sony Music. More updates regarding the film are expected to be out in the coming days. Stay tuned.