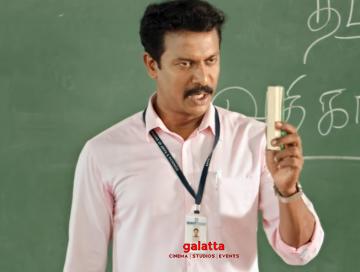 Samuthirakani was last seen in an important role in the Suriya starrer Kaappaan directed by K.V.Anand. The director turned actor's next release would be Adutha Saattai, which is the sequel to 2012 released film, Saattai. Adutha Saattai is directed by Anbazhagan and produced by Dr Prabhu Thilak and Samuthirakani's Naadodigal. The film's star cast includes Samuthirakani, Athulya Ravi, Yuvan, Thambi Ramaiah, Rajashri Ponnappa, and others.

The makers have now released the film's theatrical trailer and it is sure to get noticed by youngsters and family audiences, especially for the content it carries. As like the first part, the sequel also focusses on guiding students in the proper way and not pressurising them with studies. The film also takes a dig at the teachers who don't do justice to their job.

Adutha Saattai has music by Justin Prabhakaran, cinematography by Rasamathi and editing by Nirmal. This impactful trailer has been released on the official YouTube channel of Muzik 24*7, who owns the film's audio rights. Those who haven't checked the trailer yet, here it is:

People looking for online information on Samuthirakani,Kaali will find this news story useful.