Ashwin officially reveals his next film as lead - to make his debut in Telugu cinema!

Cool with Comali sensation Ashwin Kumar will be making his debut as a lead hero in Tamil cinema with the upcoming film, Enna Solla Pogirai, directed by debutant Hari Haran. The film features 'Asku Maaro' fame Teju Ashwini and Avantika as the female lead, while Pugazh (of Cook With Comali) will be seen playing a crucial role. Enna Solla Pogirai is a triangular love story that is produced by R Ravindran under the banner of Trident Arts. Enna Solla Pogirai has music composed by Vivek - Mervin, while the cinematography is handled by Richard M Nathan. The shooting of the film is currently underway in Chennai. Meanwhile, Ashwin Kumar has now officially revealed his next project in the film industry and this one is another biggie.

Yes! Ashwin has acted as one of the leads in an upcoming Telugu anthology film titled Meet Cute. While Ashwin's Tamil debut is progressing at a brisk pace, he will now be making his Telugu debut as well. Meet Cute is directed by Deepthi Ganta, who happens to be Nani's sister. Natural star Nani is bankrolling this anthology film under his banner of Wall Poster Cinema. Earlier this morning (August 11), Ashwin took to his official Instagram page to inform that he has wrapped up shooting for his portions in Meet Cute. The shooting of this project took place in Hyderabad and Ashwin seems to have wrapped it up. More details regarding Ashwin's segment are awaited.

This update has come as a pleasant surprise for the fans who are now eagerly looking forward to the film. Meet Cute will be an anthology of 5 short stories and has actors like Sathyaraj, Rohini, Sunainaa, in the star cast. Meet Cute is expected to release by the end of this year and it is said to be an interesting project to watch out for. For now, check out Ashwin Kumar's latest update on his debut Telugu film, Meet Cute here: 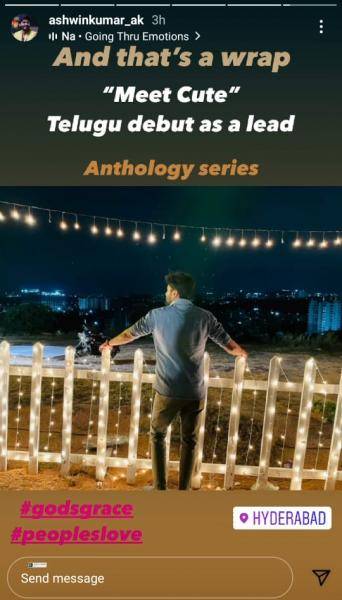