Chiyaan Vikram's son Dhruv will be making his silver screen debut with Adithya Varma, the Tamil remake of Vijay Deverakonda's Arjun Reddy. The film is scheduled to hit the screens on November 21st amidst high expectations from the youngsters. The team of Adithya Varma are actively involved in promoting the film in Tamil Nadu and Kerala ahead of the release. Vikram, Dhruv, and Priya Anand recently travelled to Kerala for the promotion of the Malayalam dubbed version of Adithya Varma.

During their visit to Kerala, the trio had visited various colleges, interacting with the students over there. They also met the press and media at the Thiruvananthapuram Press Club to talk about the film and also revealed what the audience can expect from it.  During the interaction, Dhruv had taken the reference of Kumbalangi Nights and that is when things turned light hearted. Vikram teased Dhruv at that very instant moment and Dhruv's reaction to that was priceless. The casual fun exchange of words and reactions between the father-son combo is loved by the viewers and this video is going viral on social media. Vikram is very keen on putting his son on the right path and Dhruv must definitely be blessed to start his career under the mentorship of his own father. This funny video interaction between Vikram and Dhruv is sure to put you in smile. Check it out: 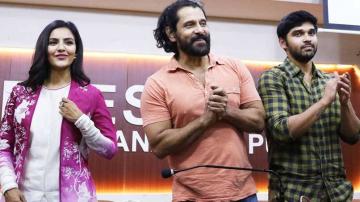 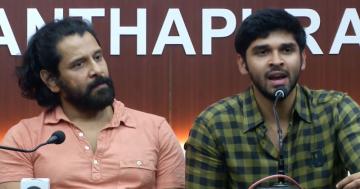