Superstar Rajinikanth's Annaatthe is one of the most expected films of this year and the film is expected to take a grand opening at the box office. The film is scheduled to release in theatres on November 4, for the festive occasion of Diwali and the fans are eagerly awaiting the d-day. Annaatthe will be Rajinikanth's next release after Darbar and the movie is directed by Siva of Viswasam fame. Produced by Sun Pictures, the film features four leading ladies - Khushbu Sundar, Meena, Keerthy Suresh, and Nayanthara. Among the four, Keerthy Suresh will be seen playing the role of Rajinikanth's younger sister and the film's story is said to revolve around her character.

Prakash Raj, Jagapathi Babu, Soori, Sathish play supporting roles in the film which has music scored by D Imman. The introduction song of Annaatthe is crooned by late S.P.Balasubrahmanyam and the song is definitely going to make everyone emotional. Imman's recent form has been phenomenal and we can expect the success streak to continue with Annaatthe as well. The film is shot by cinematographer Vetri and edited by Ruben. Earlier today (August 1), actress Meena took to her official Instagram page to share a delightful update on Annaatthe and it has made the fans excited.

The update is that she has started to dub for her portions in the film and she shared pictures of her from the dubbing suite. Sharing the pictures, Meena wrote, "#Annaatthe Dubbing". Details regarding the dubbing schedules of other actors are yet to be known, but Meena has now started to dub for her portions. One more schedule of Annaatthe is left out to be completed and that schedule is expected to take place in Kolkata. Annaatthe will be a rural action entertainer that will have a good dose of family emotions, as well.

It has been quite some time since we saw Rajinikanth in a full-fledged rural film and on that aspect, Annaatthe is going to be an exciting watch. For now, check out actress Meena's latest update on Annaatthe here: 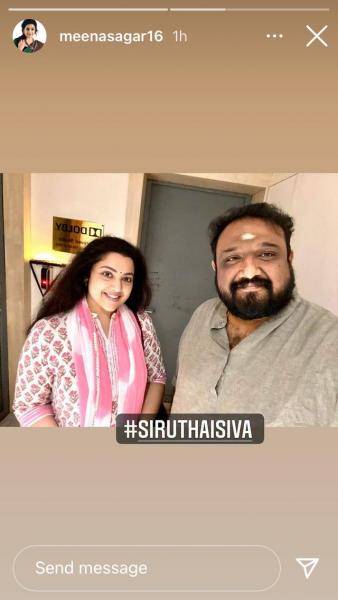 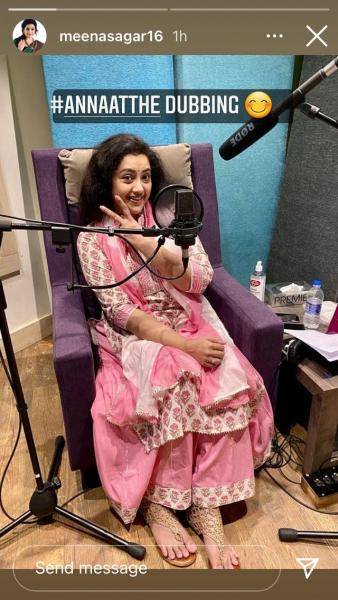