GALATTA BREAKING: Sivakarthikeyan Teams Up With This Blockbuster Director! 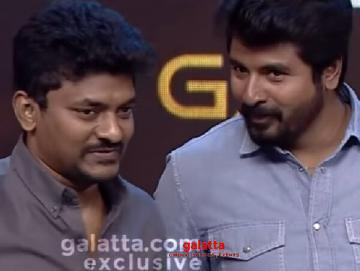 Following the grand success of Namma Veetu Pillai, Sivakarthikeyan has been busy with the shoot of his big-budget film Hero that is being directed by PS Mithran of Irumbuthirai fame. Hero is produced by Kotapadi J Rajesh under his banner KJR Studios who was earlier associated with hit films like Aramm, Gulaebaghavali, Airaa, Viswasam and Thumbaa.

And now, KJR Studios has made a surprise announcement that they will be associating with Sivakarthikeyan's production firm Sivakarthikeyan Productions for an exciting project and the details of the film will be revealed tomorrow (Dec 2nd) at 5 pm.

Our sources from the industry have hinted that the big announcement will be about Sivakarthikeyan's next biggie that is set to be directed by Nelson Dilipkumar of Kolamavu Kokila fame. KJR Studios will be producing the film in association with Sivakarthikeyan Productions.

We have been hinting about Sivakarthikeyan teaming up with Nelson Dilipkumar for an interesting project for a while now and with the official announcement just around the corner, we are excited as much as the fans. More details about the movie are expected to be revealed soon. Stay Tuned!