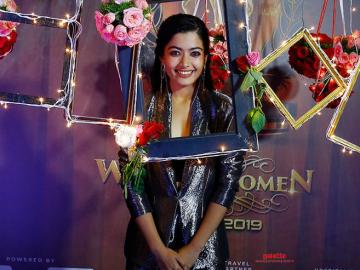 One of the most popular heroines of South Cinema currently, is the gorgeous Rashmika Mandanna, who burst onto the scene with the Kannada movie Kirik Party, in 2016. After a couple of Kannada movies, she made her debut in Tollywood and with her very second movie - Geetha Govindam, alongside Vijay Deverakonda, she became a household name. The blockbuster 'Inkem Inkem' song, immediately turned her into a youth sensation and she followed it up with a memorable performance in her latest release - Dear Comrade. Despite not starring in a Tamil or Malayalam movie yet, Rashmika has quite a fan following among the audiences across all the South industries. She has a huge lineup of movies in the offing, including her Tamil debut Sulthan, alongside Karthi.

Rashmika was awarded with the 'Youth Icon of South India' award, at the Galatta Wonder Women 2019 Awards, which was held on October 20th, at the Anna Centenary Library auditorium, in Chennai. Presenting her the award was the much-sought-after director Siruthai Siva. Siruthai Siva got on-stage through a special entry to thunderous applause from fans and was cheered on and on for quite some time before he could even address the gathering. He promised that Thalaivar 168 with Superstar Rajinikanth would be an action loaded family entertainer and that they would begin shoot soon. Rashmika then made a splashing entry on stage and couldn't stop beaming at the response from the crowd.

Rashmika was overwhelmed with the crowd support and stated that she was very happy with the response from Tamil audiences even before she has actually completed shooting for even 1 Tamil movie fully. She also added that she would try and dub for herself, in Sulthan. On the anchors' request, Rashmika then shook her legs to the chartbusting 'Rowdy Baby' number from Dhanush and Sai Pallavi's Maari 2. Rashmika and Siva raised the roof at the auditorium and we thank the both of them for gracing the Wonder Women Awards and making it a grand success!