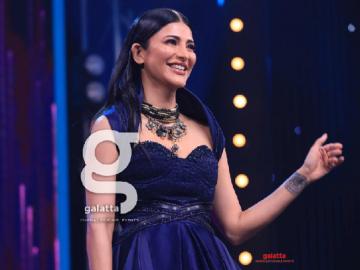 Galatta Media - a pioneer in the field of entertainment, has proven time and again over our 19-year-career, that we are the foremost in felicitating and celebrating talents at all times. Following our tradition, we came up with a new awards ceremony - the Galatta Wonder Women Awards 2019. This new awards ceremony was held to felicitate women achievers in Cinema, across five generations. The exceptional performers, trendsetters, pathbreakers, visionaries, luminaries and women who paved the way for many more to follow in their footsteps, were identified and celebrated in this grand event, which was held on October 20th, at the Anna Centenary Library auditorium, in Chennai. 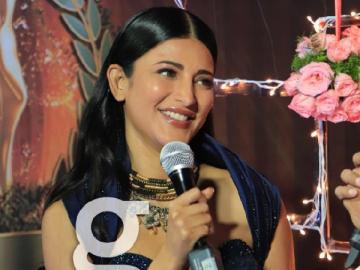 One of the stars who graced the Galatta Wonder Women Awards 2019 is Shruti Haasan, a world renowned musician and actor. She waltzed onto the stage through a special entrance and took the gathered audience by storm. She was presented with the 'Global Icon' Award by none other than the soulful composer D Imman. Shruti thanked the organizers for choosing her for this award. When the anchors asked both Shruti and Imman to either dance or sing, Shruti chose the latter. The audiences were asking her to sing different songs and there were many different requests but she chose to go with the 'Vaanam Ellai', from her father Kamal Haasan's Unnai Pol Oruvan.

Shruti's rendition of the song was met with rapturous response and following her, D Imman also chose to sing and he sang the 'Adchi Thookku" song from Viswasam and this was very well received by the gathered fans. The duo sizzled on stage and Shruti was a feast for the eyes and ears of all those gathered at the event. We thank Shruti Haasan for gracing the Galatta Wonder Women Awards ceremony and making it a grand success!