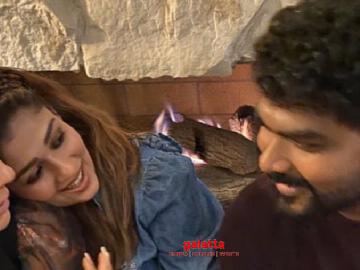 Lady Superstar Nayanthara seems to be having a gala time. Nayan and her director beau Vignesh Shivn recently took off to the USA, where they rung in the grogeous beauty's birthday. Following this, they have been on an extended vacation in the States and were even seen catching up with producer Boney Kapoor and his daughter Jhanvi and Khushi. The couple had dinner with Boney Kapoor's family and this set off rumours of Nayan being roped in to play the female lead in Boney's upcoming movie - Valimai, which has Thala Ajith in the lead. However, no official confirmation regarding this has come out.

Meanwhile, Nayanthara and Vignesh Shivn also recently celebrated the Thanksgiving festival in the USA with their close friends and a video as well as photos of this event are going viral on the internet! The lovely couple seem to be having a gala time bonding with their friends and these pics are being widely circulated. After completing her work for Superstat Rajinikanth's Darbar, which is scheduled to release on January 9th 2020, Nayanthara has moved on to her next. This project, titled Netrikann, is the maiden production venture of Vignesh Shivn's new production house - Rowdy Pictures. Netrikann is being directed by Milind Rau, of Aval fame.

Vignesh Shivn has recently completed shooting for his part of the Netflix Originals anthology, which is to also reportedly have projects from Gautham Menon, Vettrimaaran and Sudha Kongara. He is gearing up for beginning work on his next project with Sivakarthikeyan in the lead. This movie, is to be bankrolled by Lyca Productions but recently there have been rumours of the banner moving away from this project. Nayanthara's next movie - Mookkuthi Amman, recently went on floors. This project is being co-directed by RJ Balaji.

Check out the celebration video here: