Santhanam's next movie teaser is here! Take a look... 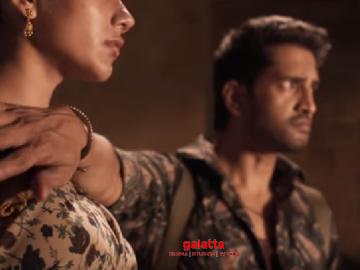 The talented Santhanam turned hero with Kanna Laddu Thinna Aasaiya and also became a producer with this movie. Since then, he has acted in a number of movies as the lead and has also bankrolled quite a few of them. A number of Santhanam's movies have been waiting to see the light of day for some time now and now we have an important update from one of them. The teaser of Santhanam's interestingly titled Dagaalty, has been released. This exciting teaser seems to be right down Santhanam's lane and has him in a role that seems tailor-made for him! The teaser also reveals the movie's release plans!

Bankrolled jointly by Santhanam's Handmade films and SP Chowdhary's 18 Reels banners, Dagaaly stars Santhanam, Ritika Singh and Yogi Babu in the lead. Directed by Vijay Anand, the teaser of this movie states that it would be hitting the screens sometime in December. If it releases this month, then it would mark Santhanam's third release for 2019, following Dhilluku Dhuddu 2 and A1. The cast of this movie also includes Radha Ravi, Tarun Arora, Santhana Bharathi, Manobala and Rekha. Vijaynarain is scoring the music for Dagaalty, while Dipak Kumar Padhy is handling the cinematography and TS Suresh is the editor.

Meanwhile, Santhanam has begun work on his next project Dikkilona. This movie will see Santhanam in triple roles and has Anagha of Natpe Thunai fame and Shirin Kanchwala as the female leads. Dikkilona, bankrolled by KJR Studios and Soldiers Factory, will also see former Indian cricketer Harbhajan Singh in a vital role. It also recently came to light that Santhanam would be starring in the Tamil remake of the super hit Telugu movie Agent Sai Srinivas Athreya. Stay tuned for updates...

Check out the Dagaalty teaser here: