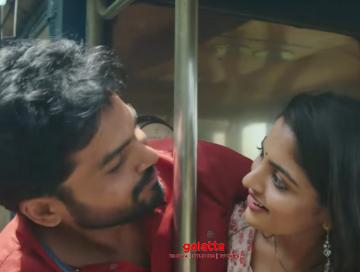 Karthi - Jyotika starrer Thambi which released this week on December 20, opened to mixed to positive reviews from critics and fans. This suspense family drama is directed by Jeethu Joseph of Drishyam and Papanasam fame. This is the first time Jyotika and Karthi are sharing screen space together and it has indeed worked in favour of the film. Sathyaraj plays a very pivotal character as the duo's father, while the rest of the cast includes yesteryear actress Sowcar Janaki, Nikhila Vimal, Seetha, Anson Paul, Ammu Abhirami, and Super Deluxe fame Ashwanth.

The makers have now released a new promo video of the song ‘Thaalelo’ from the film. This breezy melody number’s visuals feature Karthi and Nikhila Vimal. Chinmayi has crooned her voice for this number which is penned by Karthik Netha. The song is beautifully picturised by R.D.Rajasekhar whose visuals also capture the scenic beauty of the location.

With music by 96 fame Govind Vasantha, this video song has been released on the official YouTube channel of Lahari Music who owns the film’s audio rights. Thambi is produced by Viacom 18 Motion Pictures in association with Parallel Minds Production. The film is right now running in the theaters and if you haven't seen it yet, do catch it. Until then, watch the newly released ‘Thaalelo’ video song here (below the images):