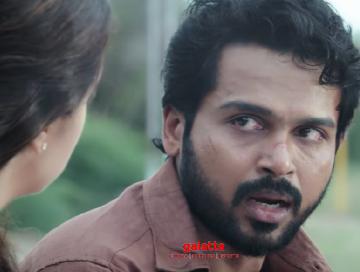 Karthi and Jyotika are starring together for the first time with Thambi, an intriguing crime thriller, directed by Jeethu Joseph of Papanasam and Drishyam fame. Karthi and Jyotika play siblings in this film, while actor Sathyaraj will be seen as their father. Produced by Viacom 18 Motion Pictures in association with Parallel Mind Productions, Thambi has music by Govind Vasantha and cinematography by R.D.Rajasekhar. As we had reported earlier, the makers of Thambi have now released the film's theatrical trailer on YouTube.

The trailer looks promising and is packed with some intriguing moments that keeps the momentum high. If the film is as good as the trailer, then the commercial success is assured. With just ten days away from release, this trailer should help the film in gaining the buzz among the audience. Karthi's last outing, Kaithi was a big hit at the box office that also satisfied the critics. He will be looking forward to continuing the success streak with this film as well.

With an U/A certification, the film is scheduled to release on December 20 along with Sivakarthikeyan's Hero and Jiiva's Seeru. The film's Tamil Nadu theatrical rights have been acquired by SDC Cinemas who would be releasing the film in wide number of screens. The trailer has been released on the official YouTube channel of Lahari Music who owns the film's audio rights. For now, check out the intense and impressive trailer of Thambi here (below the images):

People looking for online information on Jyothika,Santhosh will find this news story useful.