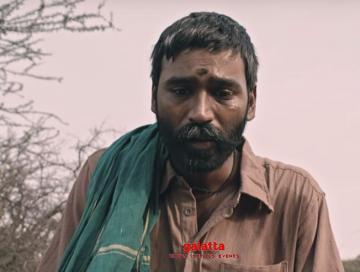 National Award winners director Vetrimaaran and Dhanush have churned one blockbuster after the other right from the time they began collaborating more than a decade back in 2007 with their Pollathavan. Their recent film together, Asuran, released in October, went on to become the biggest blockbuster for the duo in their careers among their previous associations which also include Aadukalam in 2011 and last year’s smash hit, Vada Chennai. With Asuran going on to garner both commercial and critical success, producer Kalaipuli S. Thanu has been extensively promoting the film under his V Creations banner. Featuring chart-busters by composer turned actor G. V. Prakash Kumar, the makers have now released the male version of the ‘Kannazhagu Rathiname’ video song featured on Dhanush, who has also sung it to the lyrics penned by Yugabharathi.

Asuran is still continuing its theatrical run in many parts across Tamil Nadu despite being released on the over-the-top (OTT) streaming platforms and has gone on to make over 100 crores in global box office collections till date. The film is an adaptation of the acclaimed Tamil writer, Poomani’s Vekkai novel, and also includes in its star cast Malayalam actress Manju Warrier, Teejay Arunasalam, Ken Karunas, Balaji Sakthivel, Pasupathi, Ammu Abhirami, Prakash Raj, Pawan, A. Venkatesh in starring roles.