Galatta Breaking: Arun Vijay to team up with his superhit director for the second time! 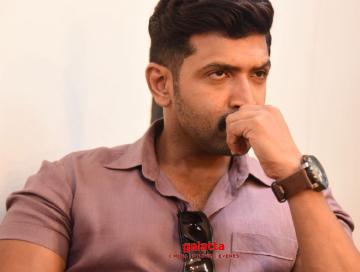 Arun Vijay is right now at the peak of his career with all his last four direct Tamil films (Yennai Arindhaal, Kuttram 23, Chekka Chivantha Vaanam and Thadam) becoming box office hits and earning him good name and fame. He recently completed shooting for his next, Mafia, the stylish action drama, directed by Karthick Naren and produced by Lyca. He is right now shooting for Sinam which is directed by GNR Kumaravelan of Haridas and Ninaithale Inikkum fame.

We have now got some exclusive details on a new project that the stylish actor has signed. Our close sources inform that Arun Vijay will be teaming up with director Arivazhagan for this new film and this will be the duo's second collaboration after Kuttram 23.

We are also told that the shooting of this film will start from the first week of December. An official announcement on this project is awaited. Arun is also part of Agni Siragugal, which is a multistarrer also featuring Vijay Antony, Shalini Pandey, Akshara Haasan as the other leads.