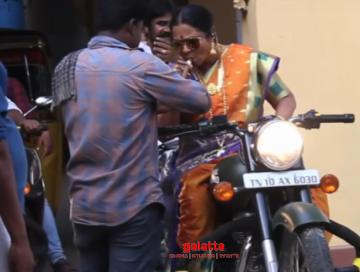 Model turned actor and former Bigg Boss title winner, Arav made his debut as a lead hero with the recently released Market Raja MBBS. The film has opened to mixed reviews from the critics and the general audience. Directed by ace filmmaker Saran, the film stars Radikaa Sarathkumar in a very important role. The makers have now released a new making video in which we see how the scenes were canned. The premise is set in the backdrop of North Madras and Arav will be seen in two different getups, one as a local don, and another, as an innocent doctor.

Radikaa plays his mother and her makeover for this film is different. In this making video, we see how Radikaa's bike riding and cigar-smoking scenes were shot. Produced by Surabi Films, Market Raja MBBS has music by Simon K King, cinematography by K.V.Guhan, and editing by Gopi Krishna. Apart from Arav and Radikaa Sarathkumar, the film also stars Kavya Thappar, Adithya Menon, Nasser, Munishkanth Ramadoss, Hareesh Peradi, and others. For now, check out the newly released sneak peek of Market Raja MBBS here:

People looking for online information on Aarav,,Kamalakannan will find this news story useful.