During the midnight hours of Sunday (July 25), actress Yashika Aannand met with a tragic accident and she is currently admitted to a private hospital in Chennai. According to reports, Yashika, along with three other friends, was returning to Chennai from Mahabalipuram in a car and while nearing Sulerikadu, the car crashed into the centre median and later rammed into a barricade on the opposite side of the road. The impact of the accident was so big that people instantly rushed to help Yashika Aannand and her friends.

Unfortunately, Yashika's friend, who is identified as Pavani Velicheti (28) died in the accident. Yashika and her two other friends are said to be critical and are undergoing treatment at a private hospital in Chennai. Yashika's father, who is residing in Delhi, has informed that he will be travelling to Chennai. This incident has created a huge buzz on social media and has come as a shocker for many. The pictures of the car from the accident zone are now doing rounds on social media. The fans are praying for Yashika Aannand and her two friends to recover soon and return to normalcy.

More details regarding Yashika Aannand's health condition are yet to be known and we will keep you posted about it. Mahabalipuram Police has filed a case on this accident and has initiated investigations on the same.

For the unversed, Yashika Aannand is a popular and upcoming actress in Tamil cinema who has acted in several interesting films including Dhuruvangal Pathinaaru, Iruttu Araiyil Murattu Kuthu, Maniyaar Kudumbam, NOTA, Kazhugu 2, Zombie, etc. Up next, Yashika will be seen playing the female lead in SJ Suryah's Kadamaiyai Sei, directed by Venkat Ragavan. The shooting of Kadamaiyai Sei was wrapped up recently and the team is working on the post-production works. Yashika also took part in the second season of Bigg Boss Tamil which gave her wide popularity among the masses.

(IN THE PIC: The girl next to Yashika is the deceased, Pavani) 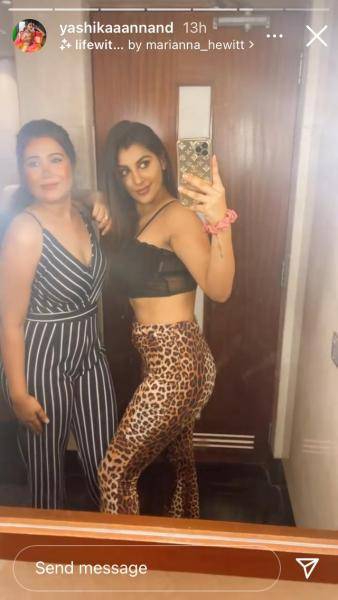