Vishal Thupparivaalan 2 shooting to happen at London for 2 months 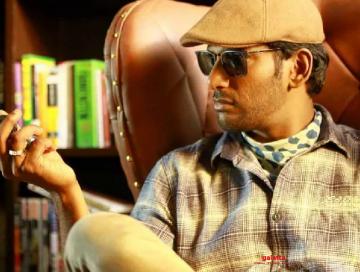 Vishal is gearing up for the theatrical release of his next film, Action, directed by Sundar C and produced by Trident Arts. This film is tentatively scheduled to release on November 15th alongside Vijay Sethupathi's Sangathamizhan. Vishal is also on the verge of completing the shooting of Chakra, his next film with Shraddha Srinath under the direction of debutant Anand. With just one more song left to be shot in Chakra, it looks like Vishal will move on to his next, which will be Thupparivaalan 2.

The sequel of this stylish action spy thriller will be directed by Mysskin with music scored by Isaignani Ilaiyaraaja. Thupparivaalan 2 will mark Vishal's first collaboration with Ilaiyaraaja and the combination sounds quite interesting. Nirav Shah is said to do the cinematography for this film and we now have some new details about this film. Our close sources state that the shooting of Thupparivaalan 2 will begin after Diwali in London and will progress there for the next two months continuously.

It can be noted that Mysskin had recently gone to London for scouting the locations and it looks like a major part of the film will be shot there. More details regarding the film will follow suit. Stay tuned.

People looking for online information on Vishal,Mysskin will find this news story useful.