Lady Superstar Nayanthara and director Vignesh Shivan have been in a relationship for the last few years and they have set couple goals several times in the past. The duo is known for their romantic pictures and the sweet rapport that they share. Vignesh Shivan recently hosted a Q/A session on his official Instagram page and during the interaction, he answered quite a lot of interesting questions. One of the fans asked Vignesh Shivan to share a secret picture of him and Nayanthara. The talented filmmaker acknowledged the question and shared an unseen picture in which he is seen taking a mirror selfie, along with Nayanthara. The picture has gone viral among the fans and it has garnered the attention of the netizens.

During the interaction, Vignesh Shivan also revealed that he likes to see Nayanthara in sarees, more than in modern dresses. Nayanthara, on the professional front, will next be seen in Netrikann which is currently in the post-production stages. Netrikann is expected to have a direct OTT release on the Disney Hotstar platform, but an official word is awaited. The film is directed by Milind Rau of Aval fame and has music composed by Girishh Gopalakrishnan. She also plays one of the female leads in Superstar Rajinikanth's upcoming rural action drama, Annaatthe. Directed by Siva and produced by Sun Pictures, Annaatthe features Khushbu Sundar, Meena, and Keerthy Suresh as the other female leads.

There is also Kaathvaakula Rendu Kaadhal in which Nayanthara will be seen sharing screen space with Makkal Selvan Vijay Sethupathi and Samantha Akkineni. Kaathuvaakula Rendu Kaadhal is touted to be a fun-filled romantic entertainer and it is directed by Vignesh Shivan. Produced by 7 Screen Studios, the film has music composed by Anirudh. As producers, Nayanthara and Vignesh Shivan have two films lined up for release - Vasanth Ravi's Rocky and Koozhangal. For now, check out the latest trending secret picture of Nayanthara and Vignesh Shivan here: 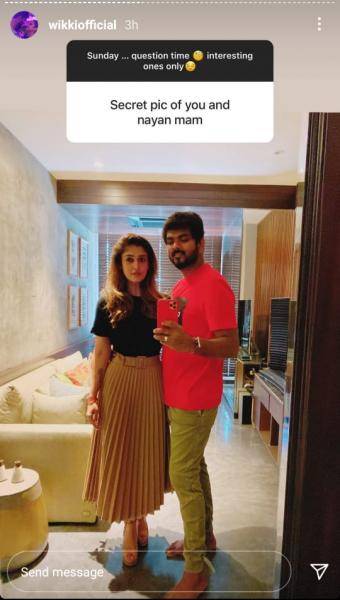