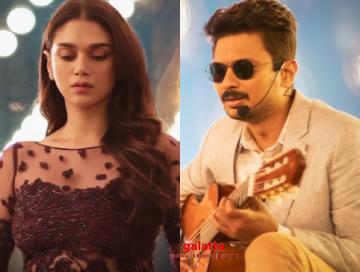 Udhayanidhi Stalin's next release would be the mystery thriller, Psycho, directed by Mysskin. The film holds a certain level of excitement among the film buffs for the freshness in the collaboration of Mysskin and Udhay. The film features Aditi Rao Hydari and Nithya Menen as the female leads, while it has music by Isaignaani Ilaiyaraaja. The first single from the film has now been released and this song is called 'Unna Nenachu'. This intense melody number is crooned by Sid Sriram and this is the first time he is singing for Isaignani.

Lyricist Kabilan has penned the lines for this song. Udhayanidhi plays the role of a blind musician and this film is expected to showcase him in a completely different dimension. Produced by Arun Mozhi Manickam's Double Meaning Production, Psycho is scheduled to hit the screens on December 27. The film's highly intriguing teaser released a few weeks back and it got a rousing reception from the fans.

Sony Music has bagged the audio rights of Psycho and this song has been released on their official YouTube channel. Catch the lyric video of 'Unna Nenachu' from Psycho here: