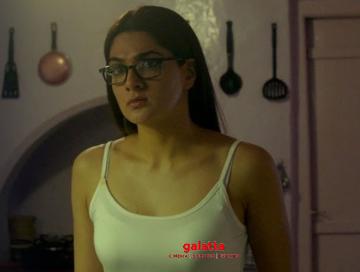 Sundar. C has garnered a name for himself as a blockbuster director by delivering several commercial hits with top stars in Tamil cinema over the course of his two decade old illustrious career. Having established himself as a credible director, Sundar. C then ventured into full-time acting making his debut as a lead hero in 2006 in the smash hit, Thalai Nagaram, and appeared on the big screen for the first time in Iruttu a few days back after a gap of three years, after he was last seen in the 2016 film, Muthina Kathirikai. Produced by Screen Scene Media Entertainment Pvt. Ltd, promotions are being carried out in an extensive manner with the makers now releasing the third sneak peek video, which is centered around the film's heroine, Sakshi Chaudhary's character, who is repeatedly getting haunted by supernatural elements in her house.

Mugavaree and Thotti Jaya fame VZ Durai's Iruttu has been gaining terrific word-of-mouth ever since its theatrical release with many lauding the story and the performances by the film's lead stars among whom include Sundar. C, Sai Dhanshika, Sakshi Chowdary, VTV Ganesh and Yogi Babu. The film's technical aspects as well have been reaping in laurels with many praising E. Krishnasamy's cinematography and R. Sudharsan for his editing.