Just in: Official update on SJ Suryah's next romantic film

SJ Suryah who was last seen in the family comedy drama, Monster, will now be teaming up with director Radha Mohan for a clean romantic entertainer. This project was officially announced a few days back and it had grabbed the attention of the fans. This combination of SJ Suryah and Radha Mohan looks very fresh and interesting and if things go as per plan, the film will hit the screens for next year's Valentine's Day weekend. The latest update is that the film's shooting has begun in Chennai with the main cast and crew. 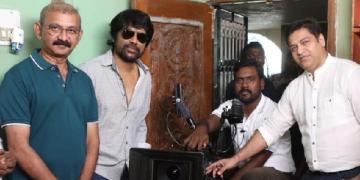 SJ Suryah took to his Twitter space to share this update with his followers and also revealed some new information regarding the technical crew. Ace editor Anthony will be taking care of the film's cuts. The already known information is that the film will have Yuvan Shankar Raja's music and Richard M Nathan's cinematography.

Youngsters favourite, Priya Bhavani Shankar will play the love interest of SJ Suryah and this will be her second film with him after Monster. This yet to be titled musical romantic thriller is produced by SJ Suryah's Angel Studios MH LLP.

Breaking: Change in Soorarai Pottru release plans - to clash with this super biggie?