Sivakarthikeyan wraps shooting for his next film! Exciting details here

Sivakarthikeyan's Hero is gearing up to hit the screens on December 20 as a Christmas weekend release. Bankrolled by KJR Studios and directed by P.S.Mithran of Irumbu Thirai fame, Hero has Bollywood star Abhay Deol playing the villain and Kalyani Priyadarshan playing the female lead. The latest update is that the makers have completely wrapped the shooting of this film. The shooting was wrapped last night at a private school premises. PS Mithran took to his Twitter space to share the update and his excitement on finishing the film.

The makers will now focus on post production as the film is less than a month away from its theatrical release. The team had recently released an augmented reality game of Hero, as part of the film's promotions, and the game has got a good reception from the fans. The songs and trailer is expected to release on December 2, however, the official word is awaited. The film has music composed by Yuvan Shankar Raja, cinematography by George C Williams and editing by Ruben. The premise of Hero will deal with the commercialization of education and the numerous scams that revolve around it. 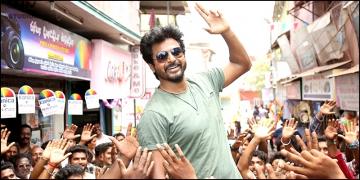 #Hero shoot wrapped up today!
What a wild ride this has been!
Big thank you to all of my technicians who worked tirelessly throughout this wonderful schedule.@george_dop 😬@dhilipaction 🔥@dancersatz 🤣@InfinitMaze 😎@Pallavi_offl 😁

Gearing up for #PostProduction pic.twitter.com/HApS1eJYSE

Kalyani Priyadarshan's request to the Hero team! Deets inside...