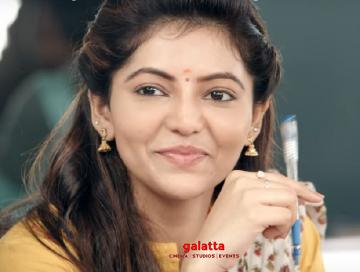 Samuthirakani was last seen in an important role in the Suriya starrer Kaappaan directed by K.V.Anand. The director turned actor's next release would be Adutha Saattai, which is the sequel to 2012 released film, Saattai. Adutha Saattai is directed by Anbazhagan and produced by Dr Prabhu Thilak and Samuthirakani's Naadodigal. The film's star cast includes Samuthirakani, Athulya Ravi, Yuvan, Thambi Ramaiah, Rajashri Ponnappa, and others. The makers have now released a new video promo of the song 'Avan Varuvaan', which is composed by Justin Prabhakaran.

This song is crooned by Sathyan Ilanko and Aishwarya Ravichandran with lyrics penned by Thenmozhi Das. This video promo features the montages of Yuvan and Athulya and the treatment looks pleasant. The theatrical trailer of the film garnered the attention of the youngsters and family audiences for the content it carries. As like the first part, the sequel also focuses on guiding students in the proper way and not pressuring them with studies.

Adutha Saattai has music by Justin Prabhakaran, cinematography by Rasamathi and editing by Nirmal. The film is scheduled to hit the screens this Friday, on November 29, alongside Gautham Vasudev Menon's Enai Noki Paayum Thota and Arav's Marketraja MBBS. This new video promo of 'Avan Varuvaan' song has been released on the official YouTube channel of Muzik 24*7, who owns the film's audio rights. Those who haven't checked the video yet, here it is: